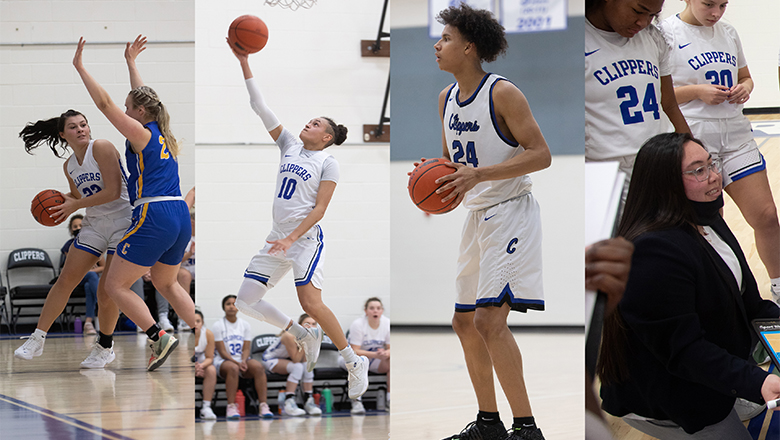 Payten was one of the most consistent players for Clippers Women’s Basketball this season, ranking among the team leaders in scoring, rebounds, and steals. In the hybrid position of guard/forward, she did a little bit of everything, such as guarding the perimeter to taking a physical offensive charge.

Sharay led the women in scoring, averaging 16.4 points a game and ranking seventh in the NWAC overall. She scored a career-high 27 points in the Clippers’ game against Centralia College and is one of four SPSCC players to average double digits alongside Payten.

Justin played a huge role in helping the Clippers Men’s Basketball get their first win of the season over Whatcom Community College, coming off the bench to score 13 points and not shying away from making big plays. He continued to build momentum with every game, scoring 21 points and 10 rebounds against Edmonds College later in the season.

NWAC also recognized Women’s Head Coach Darah Vining, naming her West Region Coach of the Year for Women’s Basketball. Her success with the team is a testament to her coaching and mentorship during the non-play pandemic year and outlook for the future.

“There were a lot of student-athletes that could have left, but decided to stay and play for Coach Vining,” said Vernell Willingham, SPSCC’s Director of Athletics. “That speaks volumes to her and her ability to engage these young ladies and retain them.”

“She continued to prepare these young ladies to be academically successful,” Willingham added. “So when they did start playing, they learned how to balance academics with athletics.”

Many women’s players have been named to quarterly Vice President’s and President’s List between 2020 and 2021.

“I’m really proud of them,” said Willingham. “It’s exciting that, within a short amount of time, the program can be where it’s at and be competitive in this tough western region.”