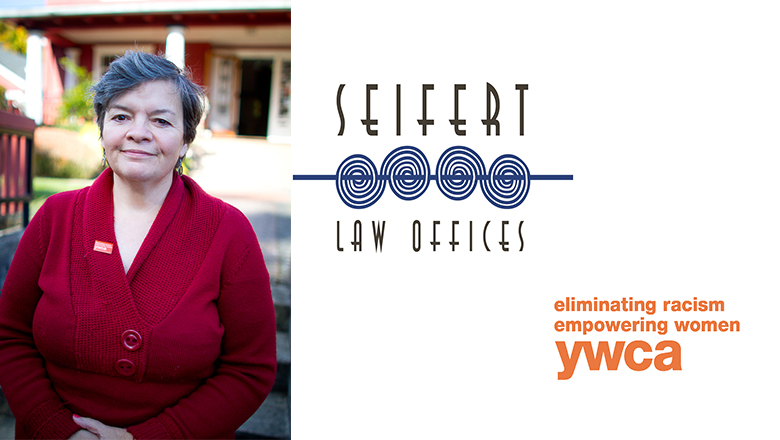 Empowering their community. Leading change.  Standing up.  Fighting for the rights of all. YWCA Olympia is pleased to announce their 2017 Business of Achievement: Seifert Law Offices.

Seifert Law Offices is an immigration & legal services firm based in Olympia. Since 1989, they have aided thousands of people from over 150 different countries successfully immigrate to the United States. Lisa Seifert is the principal attorney of Seifert Law Offices.   According to Lisa, “I believe that everyone should have a chance. Our work takes time and patience to help people.  We give it.”

Ms. Seifert is a Past President of the Washington Chapter of the American Immigration Lawyers Association (AILA) and has served on regional and national committees to advance immigration policy and practice.  She has testified in local courts as well as before the Washington State Legislature on immigration issues. She and her team have volunteered for immigrant assistance events such as AILA’s Citizenship Day, AILA’s Military Assistance Project, and support for Dreamers.  She was also one of the “airport lawyers” deployed at airports to assist immigrants and families impacted by the president’s Muslim Travel Ban.

Seifert Law Offices was also selected as Business of Achievement for their employment practices including competitive wages, health insurance, a matched retirement account, flex scheduling, and assistance for job-related training including college coursework and conferences.

When is the event?
The 24th Annual Women of Achievement Celebration will take place on Friday, November 10th at the Washington Center for the Performing Arts (512 Washington SE, Olympia).

Who is the special guest speaker?
Nikkita Oliver is a Seattle-based creative, teaching artist, and anti-racist organizer. Her writing has appeared in the South Seattle Emerald, Crosscut, and the Stranger. She holds a J.D. and Masters of Education from the University of Washington. She is a writer-in-residence with Writers in the Schools and the case manager for Creative Justice–an arts-based alternative to incarceration.  She is the 2015 recipient of the Seattle Office of Civil Rights Artist Human Rights Leader Award, the Seattle Poetry Slam Grand Champion 2014, has been on and coached numerous national poetry slam teams at both the youth and adult levels. She opened for Cornel West and Chuck D of Public Enemy and performed on The Late Night Show with Stephen Colbert. She was also the keynote speaker at the 2017 Racial Justice Summit: Intent vs. Impact in May.

A limited number of VIP tickets are available for $125 per person and include a delicious catered pre-event reception in the Black Box Theatre at 5:30, a meet & greet with our special guest speaker and Honorees, music with the Lizzy & Tarik Duo and a main event ticket.

How can I support Honorees like Seifert Law Offices?
Sponsorships are a great way to support honorees and the mission of YWCA. Honoree sponsorships start at $1,000 and include several benefits, but also help pay for family tickets for the Honoree(s).