What It Is Documentary Festival at the Olympia Film Society 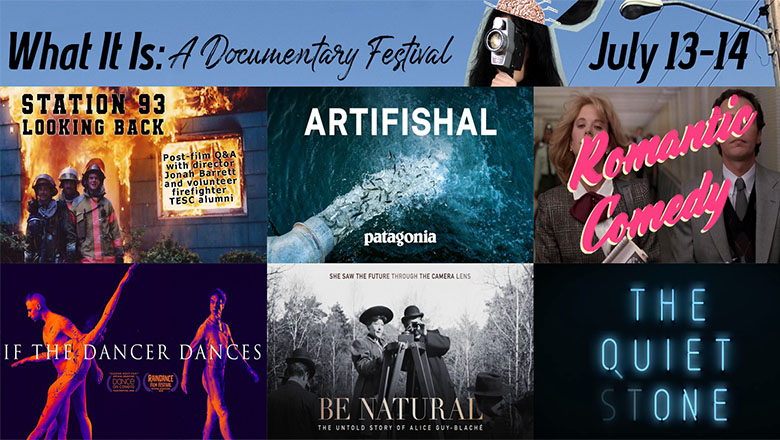 Celebrating independence, creativity, and the researcher in all of us, the What It Is: Documentary Film Festival is a two-day festival that presents both short and feature-length documentaries from across the world.

SATURDAY’S LINEUP
4:00PM: Station 93 – POST-FILM Q&A w/ director Jonah Barrett and members of Station 93
Station 93 features the untold story of the Evergreen student firefighters of the 1970’s and 80’s. Filmed during a 2018 reunion, firefighters relay anecdotes of their early years as volunteer firefighters, risking their lives on the Evergreen campus in exchange for free room and board. Seeing one another for the first time in over forty years,the alumni recall what brought them to this work, and the challenging experiences that molded them into a family. Dir: Jonah Barrett / 2019 / US / 55 min

6:30PM: ArtiFISHal
Artifishal is a film about the high cost—environmental, financial and cultural—of hatcheries and fish farms, and our mistaken reliance on human-engineered solutions. It explores our loss of faith in nature, and the impact on communities and ecosystems as wild salmon slide toward extinction.
Dir: Josh “Bones” Murphy / 2019 / US / 75 mins

9:00PM: Romantic Comedy
This documentary goes beneath the surface of our favorite films, seeking to better understand the way we view love, relationships, and romance. From clumsy meet cutes to rain-soaked declarations of love, these films reflect our experiences but are often just as problematic as they are comforting. Helped by a chorus of critics, actors, and filmmakers, and original songs by her band Summer Camp, director Elizabeth Sankey embarks on a journey of investigation and self-discovery. Dir: Elizabeth Sankey / 2019 / UK / 79 min

SUNDAY’S LINEUP
2:30PM: If The Dancer Dances
If the Dancer Dances invites viewers into the intimate world of the dance studio. Stephen Petronio, one of today’s leading dance-makers, is determined to help his dancers breathe new life into RainForest (1968), an iconic work by the legendary choreographer Merce Cunningham. With help from three members of the former Cunningham company, the film tracks Petronio’s dancers as they strive to re-stage this great work, revealing what it takes to keep a dance – and a legacy – alive. Timed to coincide with Cunningham’s centennial, If the Dancer Dances is the first documentary on the subject of Cunningham’s work since his passing in 2009. Dir: Maia Wechsler / 2019 / US / 83 mins

5:00PM: The Untold Story of Alice Guy-Blache
Alice Guy-Blaché was a true pioneer who got into the movie business at the very beginning—in 1894, at the age of 21. Two years later, she was made head of production at Gaumont and started directing films. She and her husband moved to the United States, and she founded her own company, Solax, in 1910—they started in Flushing and moved to a bigger facility in Fort Lee, New Jersey. But by 1919, Guy-Blaché’s career came to an abrupt end, and she and the 1000 films that bore her name were largely forgotten. Pamela B. Green’s energetic film is both a tribute and a detective story, tracing the circumstances by which this extraordinary artist faded from memory and the path toward her reclamation. Narration by Jodie Foster.
Dir: Pamela B. Green / 2018 / US / 103 mins

7:30PM: The Quiet One
Throughout his three-decade career as a founding member of and bassist for The Rolling Stones, Bill Wyman was known to the world as the “quiet one” in the band. Now, the famously private music legend speaks out about his extraordinary life and experiences as part of “the greatest rock and roll band in the world.” Opening up his vast personal archive—a lifetime’s worth of previously unseen home movies, photographs, and memorabilia—Wyman reflects on his early years with The Stones, the band’s meteoric rise to fame, and his search for a sense of “normalcy” amidst the whirlwind of sex, drugs, and rebellion. Endearingly humble and down-to-earth, Wyman pulls back the curtain to offer a one-of-a-kind perspective on life as a reluctant rock star.
Dir: Oliver Murray / 2019 / UK / 105 min

The Capitol Theater in Olympia, Washington has been screening dramatic narratives and documentary features since 1924, and our belief in arts, inclusivity, and emerging directors has been the staple of our programming.

WHAT: What It Is documentary festival at the Capitol Theater