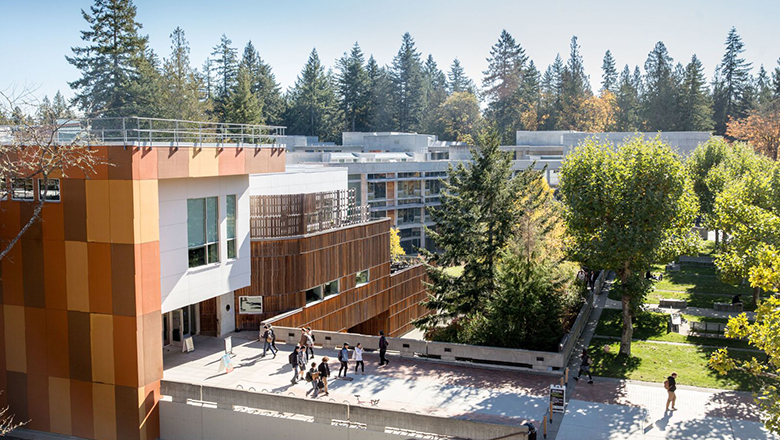 The bimonthly nonprofit magazine, based in Washington D.C, ranks colleges and universities based on three criteria: social mobility, research and civic engagement.

According to Washington Monthly’s website, the master’s university category highlights “four-year institutions that award a significant number of master’s degrees but few or no doctoral degrees—based on their contribution to the public good.”

The complete rankings can be found here.

“More and more Americans are beginning to see the value in an interconnected approach to learning and the work of our graduates show its power,” said Evergreen President George Bridges.

Recent graduates have gone on to benefit their communities, states and the nation.

Katrina Keleher ’19, who earned a Master of Environmental Studies with a GIS certificate and recently began working with the Northwest Indian Fisheries Commission as a GIS specialist.

“I feel privileged and fulfilled to have this opportunity to work for the tribes and support their habitat restoration efforts across Western Washington. To have been able to land this job right after graduation is largely a testament to the MES program’s robust interdisciplinary structure,” said Keleher.

Yen Huynh ’19, who earned a Master of Public Administration, recently accepted a new position as the Supplier Diversity Program Specialist with The Office of Minority and Women’s Business Enterprises with the State of Washington.

She works with state agencies and higher education institutions to increase spending with small minority-, women-, and veteran-owned businesses.

“Evergreen and specifically the MPA program helped me hone my skills and learn more about historically disadvantaged communities and how I can best go about advocating and supporting them,” said Huynh.

Washington Monthly is trying to change how Americans value education, taking into account more than GPAs and graduate earnings.

Paul Glastris, editor in chief at Washington Monthly magazine, who has for 15 years helped assemble the college ranking list, recently published an article titled ‘When College Rankings Get Personal’ about his son’s choice to attend Evergreen as an undergraduate student this fall.

He adds, “I am proud of and grateful to Adam for choosing a college that precisely fits this magazine’s definition of “good.””

And it seems they’re not the only ones taking notice.

This year, U.S. News listed Evergreen as #2 in Most Innovative School, #6 in Best Undergraduate Teaching, #7 in Top Public Schools, #19 in Best Colleges for Veterans, and #35 in Regional Universities West.