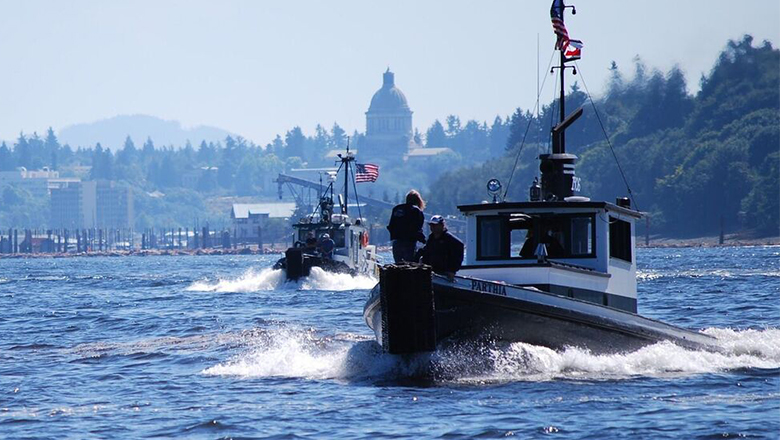 With just weeks to go, final plans are headed for the finish line, making way for the 45th Annual Edition of Olympia Harbor Days Vintage Tugboat Races and Festival, South Sound’s largest and free maritime festival at the Olympia waterfront, August 31 – September 2, Labor Day weekend. The award winning event is presented by the Olympia Kiwanis Club with title sponsor the Squaxin Island Tribe.  “Every year I have so much fun making the festival even better by adding more fun for kids and adults to create lasting memoires for the whole family.” says Executive Director Carol Riley.

The Tugboats are coming, the Tugboats are coming!  It is all about the Vintage Tugboats of the Puget Sound.  Tour over a dozen vintage tugs on Saturday and watch the World’s Largest Vintage Tugboat Races on Sunday in the deep channel of Budd Inlet.  Be sure to tour the WWII History Museum aboard retired US Coast Guard Cutter Tug Comanche.  And find not 1, not 2, but 3 mini tugs on display and as they compete in a Mini Tug – Tug ‘o War.

The Squaxin Island Tribe is again preparing to turn the Port Plaza (near the Farmers Market) into the Squaxin Island Salish Seaport featuring a beer garden, salmon bake, tribal art, cultural activities, and a tribal canoe race followed by tribal Jamming with drumming and dancing.  Rock out to the tunes of Seattle’s band The Popoffs every evening on the Seaport Stage.  On Saturday Kids can create a “Salmon-Bot” with staff from Olympia’s Hands On Children’s Museum and on Sunday kids can take their shoes off and enter into a 25-foot steel salmon named FIN!

Venture south, to Percival Landing with hundreds of arts, crafts, and commercial vendors.  Percival Park continues as home to Washington’s Lottery Main Stage featuring a mix of area classic rock bands and talented musicians.  New this year:   America’s First Corps 5-Man Jazz Combo, The Budd Bay Sea Shanty Singers, and the River Ridge High School Taiko Drumming Ensemble.   And find the inner pirate in you – join the Procession of the Pirates Samba Olywa style on Sunday.  Kids dressed as pirates can search for a prize in our treasure chest located at the Harbor House!

Enjoy the magnificent “Ships of the Harbor” sponsored by Capital Heating & Cooling.  Cruise on a steamship. Sail on a tall ship!  Tour historical ships and yachts including the Navy’s Admirals Barge the Old Man IV and a 100-year-old Bering Sea fishing vessel Tordenskjold!   Tickets on sale now for multiple excursions aboard the historic Mosquito Fleet’s Virginia V or the Grays Harbor Historical Seaport tall ships Lady Washington and Hawaiian Chieftain at www.HarborDays.com.  Riley, creator of the popular and award-winning ‘Cruise to Olympia Weekend Getaway’ states “the South Sound weekend cruise is just about sold out with only 3 spots remaining, but harbor tour tickets are still available”.  Last year harbor tour tickets sold out.

Kids of all ages can build and float tugboats in an interactive legos building station, learn about marine science at land and sea activity centers, and enjoy the creativity of Sand Carving at the Harbor by Form Finders, professional sand carvers.    Arts, crafts, commercial, non-profit and food booths will line the docks from the top of the Sound at Percival Landing north to the Port Plaza broken only by harbor views, 3 stages, 2 food courts, and plenty of photo ops.  Warning: be on the lookout for a Pirate or Viking strolling along with you!  Community support for these activities comes from Heritage Bank, TAS, Commencement Bank and OSG Dozing.

As always, Olympia Harbor Days promises to be the best way for families and kids of all ages to celebrate the end of the summer season!  And it is free!  So make your way by land or sea and cruise on down to Olympia Harbor Days! For a complete schedule and all festival details or for more information, please visit www.HarborDays.com.   Net proceeds and suggested donations support Kiwanis activities that benefit kids and their families.