Written by Natasha Ashenhurst. Photos by Greg Raines of Lionsdenpro. This story was originally published in the July 2017 issue of the VOICE Magazine. 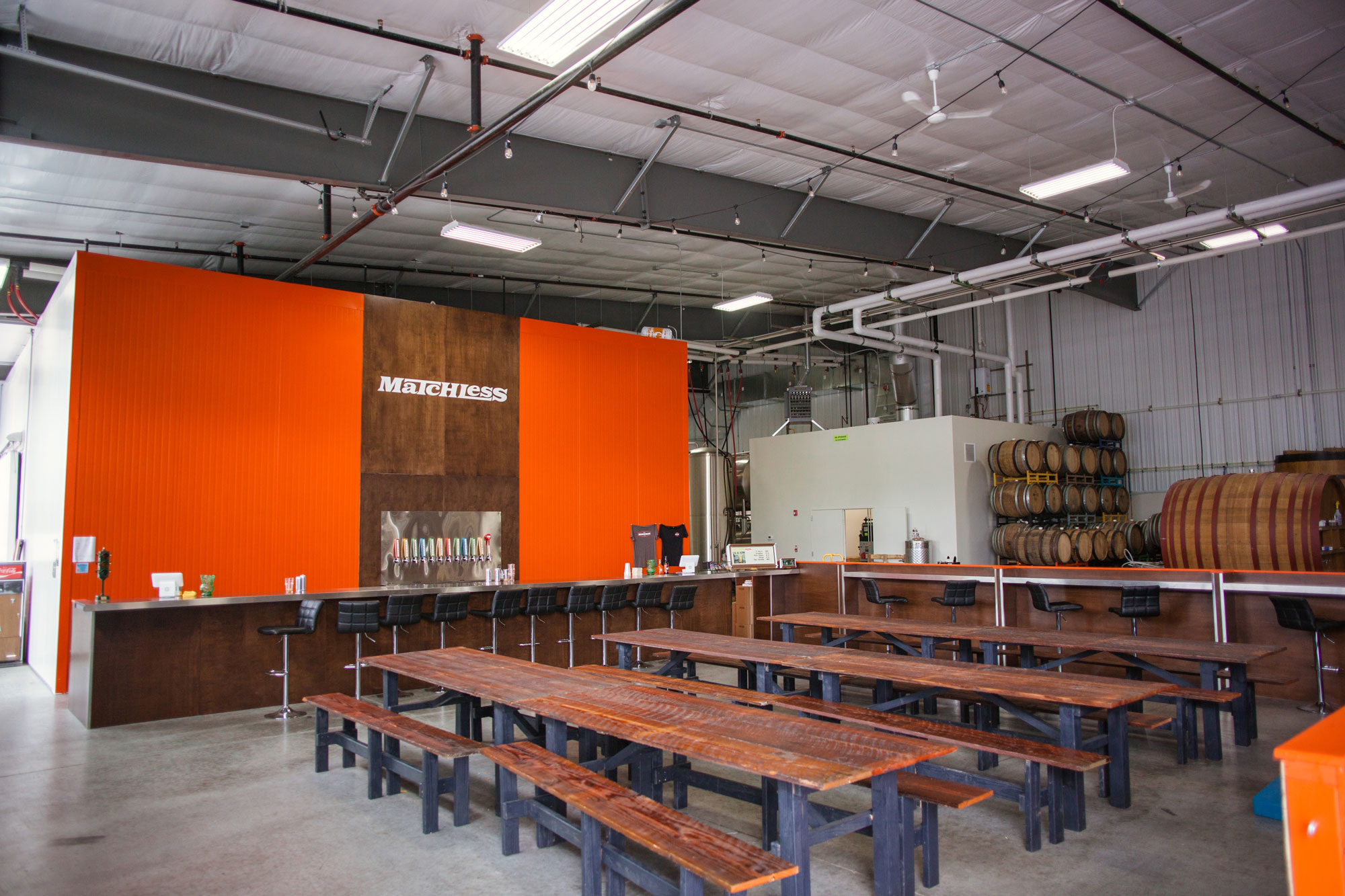 Unexpected. That is the word that comes to mind when I drove out old Hwy 99, near the Olympia Airport in Tumwater, looking for a light industrial area that is now home to South Thurston County’s newest craft beer, bakery and specialty foods destination.

Unexpected is also the word that comes to mind when I met the leaders of these businesses—one is a former firefighter from New Jersey, one is a former postman and two are former school teachers.

Three warehouses—one red, one blue and one green—make up the Deschutes Landing Industrial Park, and this is where I interviewed Jen Ownbey, owner of 8 Arms Bakery, Patrick Jansen, founder and brewmaster of Matchless Brewing, Debra Kilcup, owner of Ila’s (eye-luh’s) Foods and Rob Horn Jr., owner of Triceratops Brewing.

As we sat and sipped beer, I learned how each business got started, why they love Deschutes and why their fans don’t hesitate to make the drive to visit them in Tumwater. 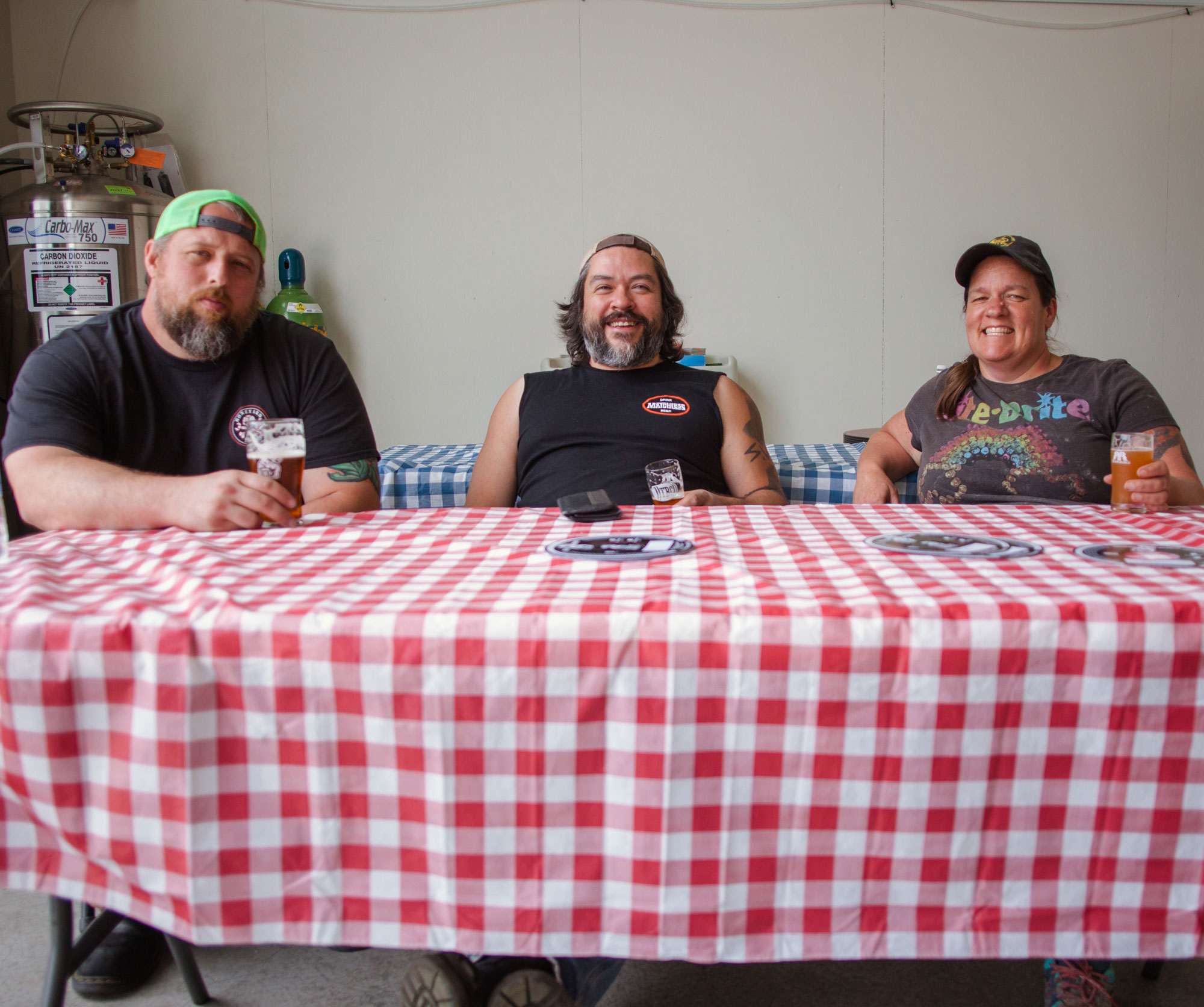 In 2007, Jen started 8 Arms Bakery in the 200 square foot garage behind her Westside Olympia home. She was a classroom teacher and started the bakery as a way to try something new and use her natural talent and creativity.

8 Arms is not your typical bakery—it is a community-supported bakery, which is similar to community-supported agriculture, offering members a chance to buy into a share session. Jen moved into her space at Deschutes two years ago, when there were a lot of vacant spaces around her. The larger space allowed her to hire help and sell directly from the bakery a few days a week.

In the back of the space is the kitchen where Jen and her team turn out delicious smelling breads, pastries and sandwiches, and visitors can buy items on display in the front of the shop. They sell traditional and gluten-free products made from organic ingredients and sells to stores, restaurants and cafes in Olympia and as far away as Port Angeles.

Two refrigerators are full of carefully wrapped goodies and employees from nearby Allafia were buying their lunch while I was there. Jen has cultivated exceptional relationships with her customers and continued growth is on the horizon. In September, 8 Arms will celebrate their 10th anniversary.

Patrick “Pat” Jansen has had quite a few careers, including a stint as a postman in West Olympia. In fact, delivering mail to Jen at her Westside home was how he got to know her. Pat says that Jen was an inspiration for him to one day start either his own brewery or sourdough bread bakery.
Pat eventually moved on to make a name for himself in the brewing world as brewmaster for Three Magnets Brewing Co., owned by Nate and Sara Reilly. Patrick likes to joke that Nate was the first one to buy the toys for the rest of them to play with. Pat, along with Grant Bolt, President of Matchless, started producing beer at Deschutes in March 2016 and in November sold their first beer. They outgrew their first space at Deschutes and moved to the space next door. Today, they are brewing IPAs, Pale Ales, Lagers, Saisons a Stout and a Brett beer. Fans of Matchless Beers don’t have to search for a bar who carries the name, though there are plenty, they can head on out to the Matchless tasting room.

Debra was a school teacher in the North Thurston Public School District for many years until illness slowed her down. She missed teaching and working, so one day she started making some of her mother’s recipes, including salad dressings and jams. She took the blue cheese dressing to a street fair in Hoodsport and it sold out right away. What was a hobby quickly turned into a viable business.
In 2009, she started selling her specialty dressings, mustards and jams wholesale and through the Ila’s Food website. When she outgrew a kitchen she was renting, she began looking for a larger space, which was how she found Deschutes. “I’ve been here since January. This is a very special place. We are neighbors and we lean on each other. It is so good to be able to go next door and have [Rob, Pat or Jen] taste something. We are a family and a community,” she said.

Rob Horn, a former firefighter from New Jersey, moved to Olympia over a decade ago, triggering his obsession with the craft brewing scene. Rob and his wife started brewing in their garage, ironically located only five blocks from Jen’s home, and sold their first beer in June 2014. “I started selling beer as a way to pay for our three kids to attend the Waldorf School,” said Rob.

Eventually, he made the decision to use their savings to go into brewing full time. They moved into their space at Deschutes Landing in February and had their grand opening in June. Jen supplied the bagels, Debra supplied mustard and Pat made sure Matchless regulars attended the Triceratops opening. It was a tremendous success.

Triceratops, like Matchless, has a tasting room and in addition to their beer, both serve Whitewood Cider, owned by their mutual friend, Dave White. “There isn’t a tasting room in Thurston County that doesn’t have the Whitewood red tap handle,” said Rob.

Jen, Pat, Debra and Rob each agree that the City of Tumwater has been extremely helpful as they’ve learned about what it takes to do business in the area. “As soon as they heard we were moving in I received an email asking us what we needed and how the City could make the process better. Everyone down the line has been supportive,” said Rob.

They also agree that while a light industrial area is an unexpected place for craft brewing tasting rooms, a bakery and food kitchens, it is also a growing trend nationally.

“We’ve seen the same set-up in San Diego and in Seattle,” said Jen. “We are all interested in making this a destination.” ●