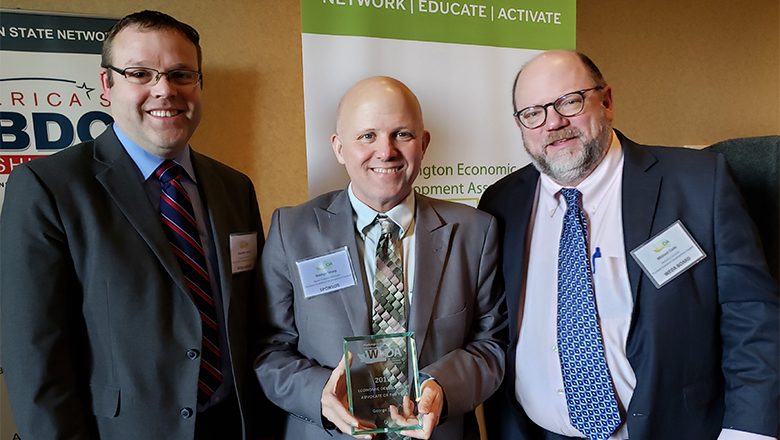 Sharp has worked for the EDC since February 2016 and in addition to other roles, Sharp is the EDC’s Rural Program Manager. As Rural Program Manager, he oversees the South Thurston Economic Development Initiative serving the communities of Bucoda, Grand Mound, Rainier, Rochester, Tenino and Yelm and the Shop South Local Buy Local Program.

“George’s efforts have led to a demonstrably improved economy in the County’s southern communities through his STEDI leadership. A consortium focused on long-range economic and community development in the rural areas of Thurston County, STEDI is committed to creating a dynamic and sustainable economy that supports the values of the people who live and work throughout Thurston County and George works tirelessly to further STEDI goals,” said John Millard, City of Tenino Clerk-Treasurer.

“George is a key member of our EDC team and his passion for helping communities, organizations and small businesses succeed is unmatched in Washington State if not the country,” said Michael Cade, Executive Director of the EDC.