by Heidi Smith • Photos by Nate Burgher, courtesy of the Thurston EDC

It’s March of 2022 and Chehalis Tribal Enterprises (CTE) CEO David Burnett has just heard some good news. As of this month, all Buffalo Wild Wings restaurants in Western Washington will be offering Talking Cedar beer, a product of the brewing arm of the Tribe’s multiple business operations. Considering the brewery opened in a crowded and highly competitive market less than two years earlier, that’s an accomplishment.

Breaking into an industry in which they had no previous experience is just the latest in a series of bold choices the Tribe has made over the past two decades. In 2008, CTE developed an agreement with Great Wolf Resorts to build a 39-acre water park, conference center and resort in Grand Mound. “They were trying to establish a relationship between a Tribal government and a publicly-traded company and merge them into a business,” says Burnett, adding with dry understatement, “That was fairly interesting.” Great Wolf Resorts owns 49% of the company and the Chehalis Tribe owns 51%. Today Great Wolf Lodge employs 516 people, a return to pre-pandemic staffing levels. 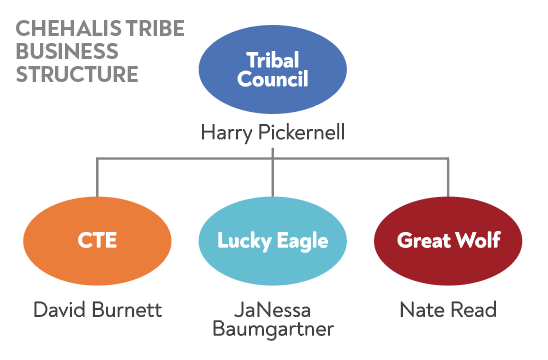 Truckstop and Confederated Construction Company. Diversification has been the key, according to Burnett. “We’ve been focused on not having all our eggs in one basket,” he explains. “Throughout the years we’ve stuck to that plan. When you have a business like a casino, you can go the route of a hotel and golf course and continue to develop a large entity, or you can do what we did and create a variety of different businesses.”

A more recent addition is Talking Cedar Brewery, Distillery, Tasting Room & Restaurant. To open the distilling portion of the business, the Chehalis Tribe had to challenge a two-centuries-old law that banned distilling on Tribal land. They had already developed a partnership with Heritage Distilling Company, a Gig Harbor-based producer of spirits, when they discovered the plan would be illegal under the existing 1834 statute. Tribal leaders lobbied Congress, which voted to repeal the law and remove prohibitions on alcohol distilleries on tribal lands in 2018. “That was a standout moment,” says Burnett. “We were able to get a national law changed.” 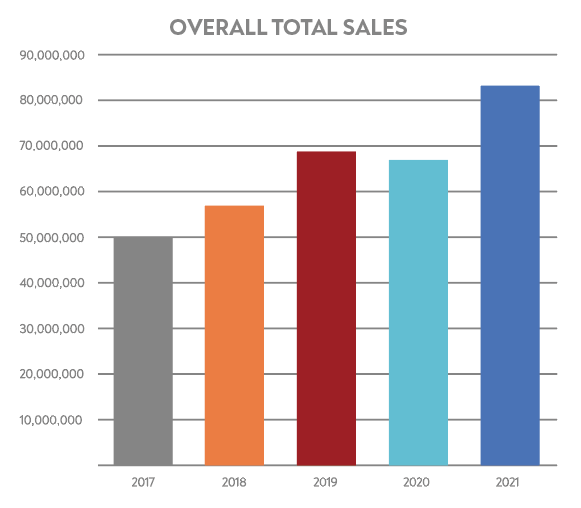 Talking Cedar’s state-of-the-art brewing facility is in the same building as its restaurant and distillery. It can produce 120 kegs in one batch through six 120-barrel fermentation tanks. Across the street at a smaller annex, the brew team develops small batches for testing in the taproom. How customers respond determines whether they create a larger batch.

Generating income and creating employment are two factors the Tribe considers when looking at any new potential, along with capacity. “We look at the potential return on investment for the pure business part, but we also look at jobs,” Burnett maintains. “With a truck stop or a brewery and distillery, those are providing a different type of job than we’ve had in the past. We’re looking at opportunities for our tribal members, but we have far more jobs than tribal members, so along with that comes opportunities for the surrounding community.” Not including Great Wolf Lodge staff, the Chehalis Tribe employs 471 people through its various businesses, including 39 tribal members.

In 2022, the Tribe is exploring a new opportunity through its construction company: cable installation. “We’re going to take advantage of the federal effort to get high-speed internet to underserved communities,” says Burnett. “We’ve started a division to do both underground and overhead fiber cable installation.”

Meanwhile, fans of Talking Cedar beer can look forward to the potential of a new product in the coming year: Talking Cedar liquor. After the company’s brand of beer did so well in the marketplace, CTE began to give serious consideration to introducing a new brand of spirits in 2022 or 2023.

All revenues from CTE’s diverse operations go to the Chehalis Tribal government to be used for tribal members. Of all the Tribe’s economic achievements, that fact gives Burnett the most satisfaction. “I could think of big moments that we’ve had with the businesses that have come along,” he says, “but at the end of the day, if we can provide the government with the resources it needs, that’s a standout moment at the end of every year.”