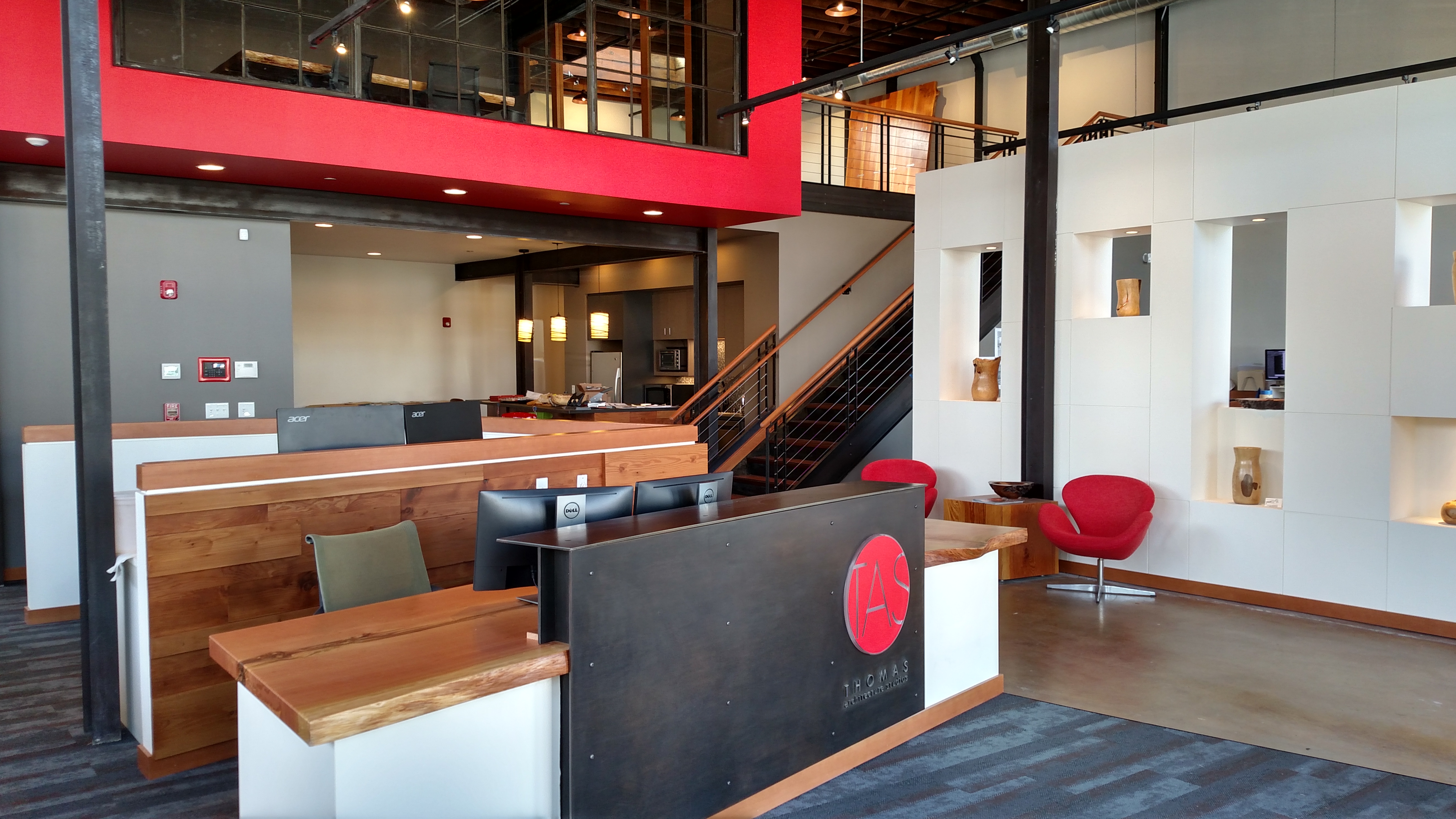 TAS experienced considerable growth over the last 12 months, nearly doubling in firm size from 11 employees to 20 employees currently. After outgrowing the then current headquarters on 109 Capitol Way North, the firm opened a second location in July 2017— the TAS Annex—across the street at 114 Capitol Way North.

With a strong desire to join the two offices, Ron Thomas, AIA, President of TAS, sought a new location in Olympia’s historic downtown where TAS could form its new headquarters.

Thomas purchased the building at 525 Columbia Street SW in December 2017 under a newly formed LLC. “It was important for us to find a building that was historic in a downtown location,” remarks Thomas. “The fact that this building was designed by Wohleb made it a perfect fit for the home of our new TAS headquarters.”

The new space doubled the former headquarters’ footprint and was designed to support TAS’ organizational culture of a collaborative work environment. A lease expiration necessitated the TAS staff formerly at 109 Capitol to temporarily move into the west half of the building, separated by a demising wall, during the four-month remodel. In early April, TAS moved into the newly remodeled east space, reuniting the entire staff and leaving 3,400 SF of available tenant space in the west half of the building.
Overall building and tenant improvements were aimed to preserve and reuse many of the historical building features. Steel sash windows found buried in old walls were repurposed into interior window walls on the mezzanine level and sliding office doors on the ground level. Additionally, the wood rafters and metal columns and beams, formerly painted black, were media-blasted to expose the original Douglas fir wood and steel.

The mezzanine was extended to accommodate both a conference room and makerspace. Construction is expected to continue through fall of 2018 which will include new storefront windows, steel awnings, and a refreshed exterior including a corner
marquee sign.

About Ron Thomas
For over 40 years, Thomas’ passion to improve the lives of those who are impacted by his designs has led to a career focused on urban design, civic facilities, and housing for communities large and small from New England to the Puget Sound Region of the Pacific Northwest. As President of TAS, Thomas is a working principal, serving as team leader and lead designer on all projects. Thomas’ architectural career began in Olympia, WA in 1975. He practiced in Boston, MA from 1983 – 1991 and in Tacoma, WA from 1991 – 2006.

Since returning to Olympia, Thomas’ commitment to the Downtown Olympia renaissance is exemplified in recent downtown projects such as the Thurston First Bank mixed-use building, Campus Lofts and 321 Lofts. In November 2017, Thomas was awarded the Charles T. Pearson Honor Award by the American Institute of Architects Southwest Washington (AIA/SWW).

About TAS
Olympia-based architecture firm Thomas Architecture Studios focuses on civic, housing and community planning and design. Founded in 2006, the firm is comprised of 20 employees. The firm’s motto, “Improving Lives by Design” is the leading force behind each project with an emphasis on environmental responsibility and historic preservation. Notable active projects include Annie’s Artist Flats & Studios—an adaptive reuse of the existing Montgomery Ward building; Views on Fifth—an adaptive reuse of Olympia’s former Capitol Center Building; Westman Mill; The Laurana (former Les Schwab); and Market Flats. A few of TAS’ civic projects include improved headquarters for Lewis County PUD, space needs assessments and feasibility studies for both the Thurston County Courthouse and Kitsap County Courthouse. TAS was the recipient of the 2016 Futurewise Livable Communities Award, the 2016 Olympia Rotary Environmental Protection Award, the 2017 AIA/SWW Merit Award, the 2017 City of Olympia Design Review Board Merit Award, and was recently nominated as a finalist for the Thurston EDC Small Business of the Year Award. For more information, visit www.tasolympia.com.
Contact Information: Sokha Meas Colbo | 360.915.8775