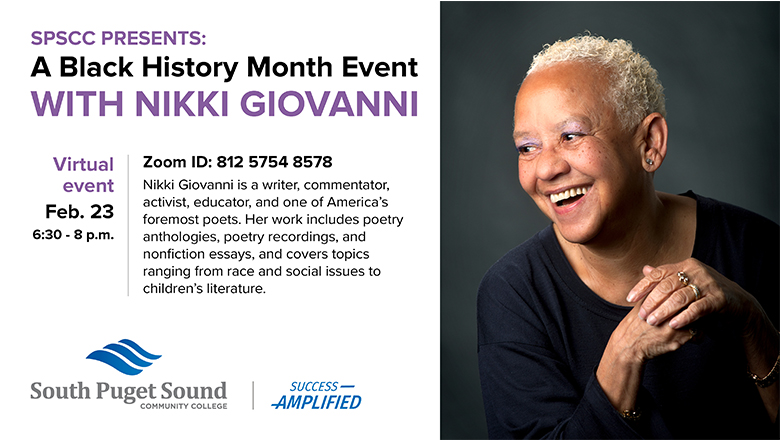 The event will open with a recording of the Black National Anthem by Theresa tha S.O.N.G.B.I.R.D., followed by a lecture and moderated Q&A with Nikki Giovanni. S.O.N.G.B.I.R.D. will close out the event with a performance of “You So Black”.

Giovanni is a writer, commentator, activist, educator, and one of America’s foremost poets. Her work includes poetry anthologies, poetry recordings, and nonfiction essays, and covers topics ranging from race and social issues to children’s literature.

Theresa tha S.O.N.G.B.I.R.D. is a Grammy-nominated spoken word artist, vocalist, actress, and educator who has shared the stage with acts including the Last Poets, Omari Hardwick, Marsha Ambrosius, and more.

The community is invited to join in this free virtual event by following the Zoom link below:

Nikki Giovanni is one of this country’s most widely read poets and one of America’s most renowned poets worldwide. Giovanni has received numerous awards in the course of her career, including seven Image Awards from the N.A.A.C.P., more than two-dozen honorary degrees, the first Rosa Parks Woman of Courage Award, the Langston Hughes Medal for Poetry, and the Carl Sandburg Literary Award; additionally, Oprah Winfrey recognized her in 2005 as one of twenty-five “Living Legends.” She continues to teach, write, and publish books, the most recent of which is A Good Cry. Her newest collection, Make Me Rain, was released in October of 2020.

This Grammy-nominated, viral sensation hails from the south suburbs of Chicago and calls Atlanta home. Member of Delta Sigma Theta Sorority Inc., S.O.N.G.B.I.R.D.  is committed to education and service in her community. S.O.N.G.B.I.R.D. is dedicated to making arts and humanities accessible to young people through her outreach in school systems across the country, while also using her skillset to provide talent consultation/coaching and production management through her company, B.I.R.D. Media Enterprises.