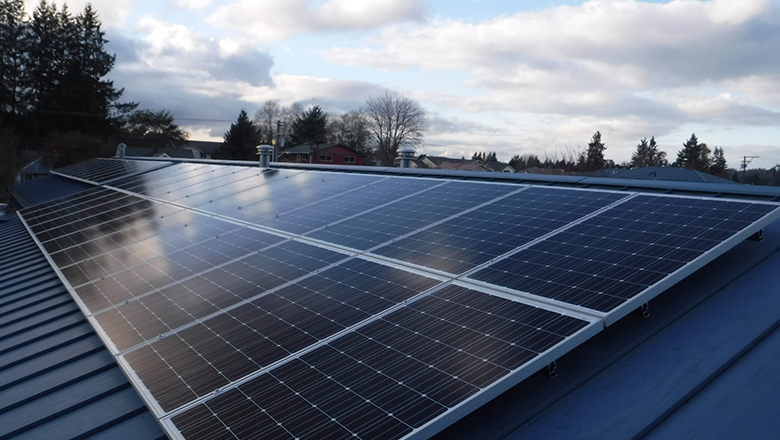 By Rebekah Finn
This story was originally featured in the February 2017 VOICE Magazine, published by the Thurston County Chamber.

Many would say that a hot cup of coffee is essential for getting through a dark Pacific Northwest winter day. What if we could harness the natural energy around us and translate that into a steaming cup of joe? 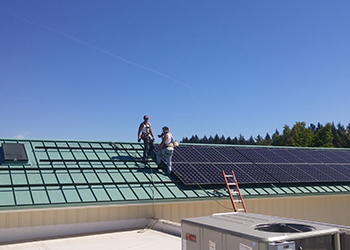 Here in Olympia, our business community has come up with a way to use sunlight and turn it into that essential human fuel, maybe not directly, but via the innovative partnership between South Sound Solar and Batdorf & Bronson Coffee Roasters.

As one of over 50 Thurston area businesses to install a South Sound Solar energy system, Batdorf & Bronson has harnessed the renewable energy of the sun as a supportive resource in creating delicious coffee.

“I enjoy the part of my job that allows me to look at ways to reduce our environmental footprint,” explains Batdorf maintenance engineer Jim Unzicker.

“It’s been a win-win for us. The initial cost worried me a bit but the results of our investment shine upon us daily.”

And other local businesses have followed suit, with Impressions Dentistry in Lacey and T Brothers Liquor & Wine Lounge in Olympia both having their own South Sound Solar systems installed in recent months.

Of the approximately 700 solar systems in Thurston County, South Sound Solar has installed over half. 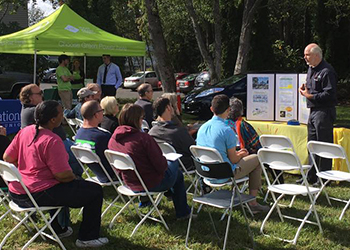 At the heart of South Sound Solar is its mission-driven founder, Kirk Haffner. Before receiving his Masters in Physics in 1996, Kirk was an award-winning math and science teacher. In the photo above Kirk is presenting at the Olympia Solar Fest.

Mission Driven Business
At the heart of the company is its mission-driven founder, Kirk Haffner. Before receiving his Masters in Physics in 1996, Kirk was an award-winning math and science teacher.

“His first love is as a teacher and communicator. His personal philosophy is founded in sustainability, and as his career developed, he saw the opportunity to not just live it, but actually do something that contributed to the spread of sustainable lifestyles. That’s what the business is about,” said Jon Engelman, Office Coordinator for South Sound Solar.

“Kirk is absolutely dedicated to educating the community. That’s his main goal.”

That dedication is apparent in Haffner’s many speaking engagements, which have included giving his “Solar 101” presentation at Timberland Regional Library events, the Olympia Solar Fest, and more. Coming up this spring, the South Sound Solar team will participate in the Oly Energy XP April 14-15 at the NOVA School in Olympia. This free two-day event features classes for middle schoolers Friday, and educational workshops open to the public Saturday.

South Sound Solar is also a sponsor for the upcoming Thurston Green Forum event in support of the Thurston Green Business program, where Haffner will have the opportunity to educate Thurston Chamber members and guests on solar energy systems.

Other community sponsorships include support of Harlequin Productions, Hands on Children’s Museum events, and Music in the Park bands, to name a few.

Haffner’s employees speak highly of his family-oriented and community-focused leadership.

“As a business owner, he is very supportive of a work-life balance. We have the opportunity to work from home, there are flexible shifts,” explained Engelman. “Everybody’s input is welcome, and he’s aware that the work that we all do together is just one part of all of our lives. It’s a healthy work environment that’s collaborative.”

And that collaboration extends to the local economy, where Haffner’s staff is dedicated to connecting with other businesses. The team is even developing a referral system on their new website to connect their own customers with other recommended businesses.

“In everything we do, we choose local vendors when possible” explained Engelman.

Crain’s Office Center supplies the office, Ben’s Automotive services the company vehicles, and Town & Country Roofing provides roofing for any installation needs. The solar panels used for the systems are even manufactured in-state, by Itek Energy in Bellingham.

South Sound Solar’s adamant support of local businesses results from the marriage of Haffner’s community focus with his commitment to spreading the sustainability gospel.

Engelman points out that local vendor support has “a huge element of sustainability. Why pay for something that’s shipped halfway across the world, which has energy costs to it?”

New Standards for New Technology
The speed at which solar energy can be adopted in the region has a lot to do with the actual infrastructure of the local utilities. As Dubes explained, solar energy is “still a fairly new concept,” so the increasing market demand is not always met with the necessary staffing to handle it.

Engelman regularly has to manage the complexities of how a potential customer’s local utilities may impact the cost return of their solar system.

“There were nuances that weren’t taken into account when these programs were established.”

Engelman continued, explaining, “converting to this ‘new grid’ takes some labor, and effort and time.”

He and the team work closely with the local Public Utility Districts (PUDs).

“Everyone understands that we’re all in it together, it is just simply the wave of the future. It’s absolutely a necessity, and so we’re all just figuring it out together,” he said.

On the state level, the systems policies have not quite caught up to the needs of energy adaptation. Solar Installers of Washington, a lobbying association of which South Sound Solar is a founding member, has been instrumental in advocating for relevant changes in Washington State laws and regulations.

An upcoming Solar Lobby Day is in the works for the current legislative session.
What sustainable energy minded businesses and farms do have going for them, however, is the federal USDA Rural Energy for America Program (REAP). The grant program provides funding to rural small businesses and farms for up to 25 percent of the cost of a solar system.
Small-business owners can go directly to the USDA to apply, or they can take advantage of South Sound Solar’s comprehensive application service in conjunction with the installation.

In order to qualify for a USDA grant, the owner of the property, the name on the energy bill, and the purchaser of the solar system need to all be the same entity.

The next deadline for applying for this USDA grant is March 31, 2017. Through this program, South Sound Solar’s Toby Dubes has so far coordinated nearly $300,000 in refunds for about 14 South Sound customers.

So is the initial expense worth it to a local business wanting to go solar?

“Absolutely,” says Unzicker. “This is a proactive long term investment that has many rewards. Being Americas first 100 percent green powered coffee roaster, we didn’t make this investment planning on the panels to pay off immediately, we just know it’s the right thing to do. The decision took foresight but the sun will be there every morning. Some days are brighter than others but not a day has gone by when we didn’t produce at least a little bit of energy.” ●