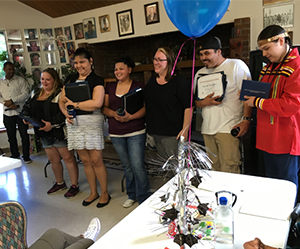 The Skokomish Indian Tribe has recently made significant strides in the completion of basic education for adult tribal members—earning a high school diploma as an adult. Thanks to the hard work of SPSCC Director of Tribal Programming Dr. Shanon Millman and Skokomish Education Director Antonio Sandifer, the Skokomish Indian Tribe has seen seven graduates from the High School 21+ (HS21+) program in less than one year with two more on the cusp of completion. Two of the graduates have already enrolled in classes at SPSCC.

Millman has been with SPSCC for fifteen years, working in the college’s basic skills and testing areas and as adjunct faculty. Around 2010, Millman’s role began to transform. She began splitting time between her work at the college and building relationships with local tribes to create high school completion programs, including GED and HS21+ programs with Nisqually, Squaxin, and Skokomish tribes. Since 2010, Millman has helped upwards of 80 tribal members complete a GED or High School Diploma as an adult. SPSCC executives recognized the tremendous value Millman was bringing to the tribes and the college created a full-time position for Millman to continue her work in early 2016.

“Working with Skokomish has been particularly meaningful to me because the tribal members have to overcome a lot. They are surrounded by substance abuse, negative perspectives on education, and the tribe doesn’t have as much money as others,” stated Millman. “I have to thank SPSCC for recognizing the importance of the relationships I have been building and allowing me to help these amazing students overcome obstacles and complete their education.

This is the reason people go into education in the first place.” SPSCC President Dr. Tim Stokes attended a Skokomish Indian Tribe graduation on June 23 and was moved by the relationship that Millman built with the students. “Dr. Millman and Antonio are relentless in their advocacy for tribal members. This program aligns beautifully with our mission of access and success,” said Stokes. He added, “SPSCC is honored to offer HS21+ to the tribes in our service area. We take seriously our goal of increasing educational attainment and economic mobility for underrepresented citizens.  The notion that education—particularly higher education—is a common good that improves lives is at the core of our daily work.”

Millman has made strong relationships with the two HS21+ students that have enrolled in classes at SPSCC. Eleanor Smith plans to study business and work toward a professional career and Ashley Longshore plans to start exploring her interests at college with online courses. “Someday, I’d love to bring college classes out to the reservation,” said Millman. “Classes on the reservation may allow students to further their education within their comfort zone.” Currently, SPSCC offers classes in Olympia and Lacey, as well as online and hybrid classes.