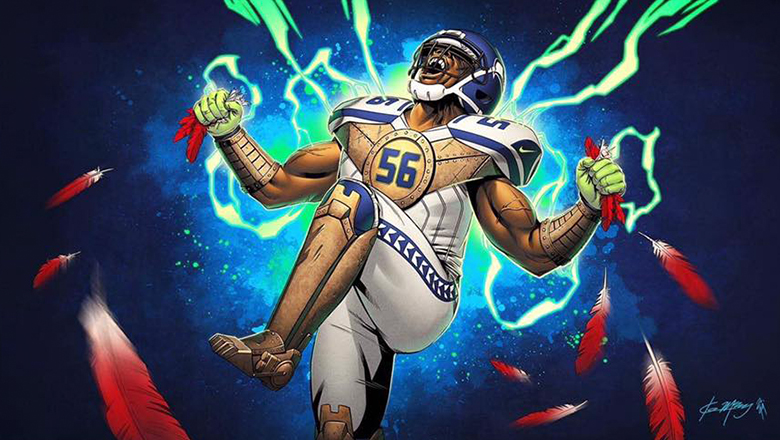 Sunday night’s history-making game will be one Seahawks fans will remember for a very, very long time. For SCJ’s Kevin McCoy, it’ll be one he never forgets.

Kevin, SCJ marketing coordinator by day and digital artist and illustrator by night, has been drawing since he was a kid, and this past weekend had his work on display for millions of football fans online. The Seattle Seahawks commissioned five original pieces from Kevin for the promotion of each of its primetime games this season, last night being the first.

“It was surreal,” Kevin said of seeing his art on such a grand stage. “I was ecstatic!”

Kevin’s journey with the Seahawks started back in April at the Emerald City Comic Con. He was showing his art at the comic book and pop culture conference when he spotted Seahawks superstars Richard Sherman and Bobby Wagner.

“I went up, introduced myself and showed them pieces I had done of them,” he recalled. “I told them they were some of my best sellers.”

“We took pictures together, all of us with the art, and the next day, the team’s Director of Marketing approached me at the conference. My whole year has just been snowballing.”

One month later in May, 20th Century Fox released its newest X-men movie, X-men: Apocalypse, and Kevin created one of the posters for its social media campaign.

“This was a fun project to do,” he said. “There were a lot of other artists who worked on the project with lots of variations and illustrated posters. I was just humbled to be invited and blessed to be involved.”

SCJ Vice President Eric Johnston said the firm is proud to have such a talented artist in the group. “We are always looking for people whose unique skills enhance our team,” he said. “Adding Kevin to our roster has diversified our playbook, and his good-natured spirit and camaraderie are a good fit for our firm.”

He continued, “SCJ is building a championship-caliber team, and it is affirming when an organization like the Seahawks recognize that talent.”

Celebrating a 10 year anniversary this year, SCJ has grown steadily from three employees in one location, to a dynamic team of nearly 70 employees in five locations: Seattle, Vancouver, Lacey, and Wenatchee, Washington and Denver Colorado. SCJ Alliance, a nationally-recognized firm, was founded in 2006 and in the last 12 months was the recipient of two top places to work awards.