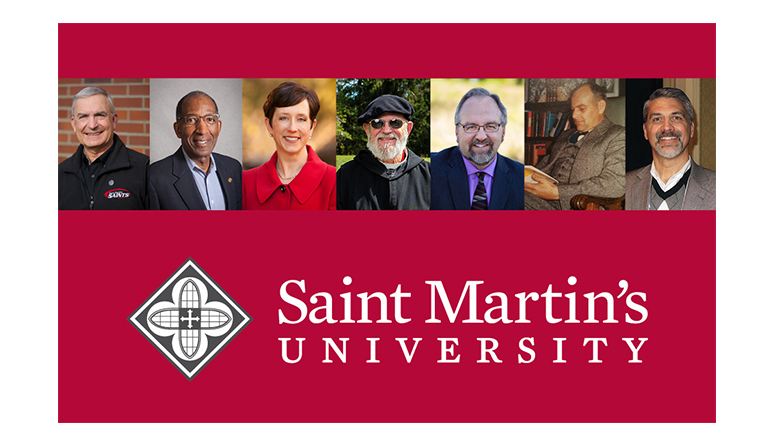 Barte is being recognized for his years of service to Saint Martin’s University. He has been a member of the Saint Martin’s Alumni Association for more than 20 years and served a term as president. Throughout this time, he has also been involved with the Capital Food and Wine Festival as a deputy director, wine and sponsorship committee chair, and general volunteer. Barte has also been a part of the concessions trailer at Lakefair and other local events. Barte is a fixture on campus, visiting almost daily. After retiring, he took a part-time job driving for Saint Martin’s athletic teams, international programs, and other student groups. During his time shuttling students, coaches, faculty, and staff to and from destinations, Barte has become an ambassador for alumni relations. He has even been known to spend his vacation time meeting with potential students and their families to help admissions with recruiting efforts.

Parker is being recognized for his professional achievements. He is a technical fellow, technical lead engineer and Boeing designated expert at The Boeing Company. In this position he leads and interfaces with 20 engineers, scientists and technical technicians to solve production material problems, research new materials, and perform failure analysis support and investigative analysis in support of the National Transportation and Safety Board and the Federal Aviation Administration. In addition, Parker has written and developed the Boeing – Edmonds Community College educational experiential learning exposure internship program which has been successful in replacing the maturing technical technician workforce at Boeing. Besides his professional career, Parker is active in mentoring and coaching young engineers and scientists and working with various science, technology, engineering and math (STEM) outreach programs. He has also been an assistant basketball coach at Seattle Pacific University for more than 30 years. Moreover, Parker serves his community through his church by working with youth and young adults and he serves on a number of professional and nonprofit boards.

Fr. George is being recognized for his Benedictine service. He has dedicated his life to service for approximately 70 years as a member of the Saint Martin’s Abbey and as a faculty member at Saint Martin’s University, where he has taught a variety of philosophy courses since 1962. He is a leader in his field and is well published. Fr. George has also served both organizations as a member of the Board of Trustees for numerous terms. In his downtime, you can find Fr. George playing the piano at a variety of functions.

Shea is being recognized for his service to the community. He is a co-founder and president of SCJ Alliance, a nationally recognized, multidisciplinary consulting firm specializing in civil engineering, transportation planning and design, environmental and urban planning, landscape architecture and design, and public outreach. Since its inception in 2006 with three people, SCJ has grown to 85 employees. Community service has been one of Shea’s priorities throughout his career, and giving back to the community has become a hallmark of the SCJ company culture. Shea is the current chairman of the board for the Thurston County Economic Development Council, and a long-time board member and volunteer. He served on the Tenino school board for 10 years, and is a current member of the South Puget Sound Community College Foundation board. The SCJ team, led by Shea’s example, has supported dozens of nonprofits with volunteer hours and financial donations in the communities in which its employees live and work.

Spiller is being recognized posthumously for his professional achievements and service to Saint Martin’s. He spent his career as an attorney, and while in private practice in Seattle, Spiller provided legal counsel to the Washington State Legislature, Saint Martin’s College (now University), the Archdiocese of Seattle and Catholic Charities, in addition to his firm’s clients. Spiller and former Washington State Attorney General, Smith Troy, were instrumental in the 1954 legal battle to keep the state capital in Olympia. Spiller also worked tirelessly in condemnation law as Interstate 5 made its way south to Thurston County, resulting in a substantial land acquisition, which greatly impacted the Saint Martin’s Abbey property. Spiller was a man of great faith, and was a dear friend of the monks of Saint Martin’s Abbey. He provided years of professional counsel to the Abbey and school, and was a frequent guest at the Abbey. Spiller passed away in 1981 and has three surviving children, two of whom are alumni.

Thomsen is being recognized for his professional achievements. As vice president of business development for Kirby Lester Pharmacy Automation, Thomsen is considered one of the world’s foremost authorities on healthcare‐related automation and technology. He is also the founder and president of The ThomsenGroup Inc., through which he provides expertise and consulting services for public, government and private sector healthcare and pharmacy operations. Thomsen has written and published numerous books and papers regarding comprehensive reviews and assessments of hospital, long-term care, outpatient, retail and mail-order pharmacy, and is a frequent keynote speaker for major pharmacy associations around the globe. Thomsen is a member of the National Association of Boards of Pharmacy (NABP) Task Force on Automation and co-authored the NABP Model State Pharmacy Act and Model Rules in 1997 and has testified before numerous state congresses and the FDA regarding pharmaceutical regulations. In addition, he has been issued two US patents for his work on robotics and automated workflow systems, serves as a frequent guest lecturer at schools of pharmacy, provides expert witness services for pharmacy automation and technology-related cases, owns additional healthcare-related companies and continues to serve on numerous boards that benefit the industry.