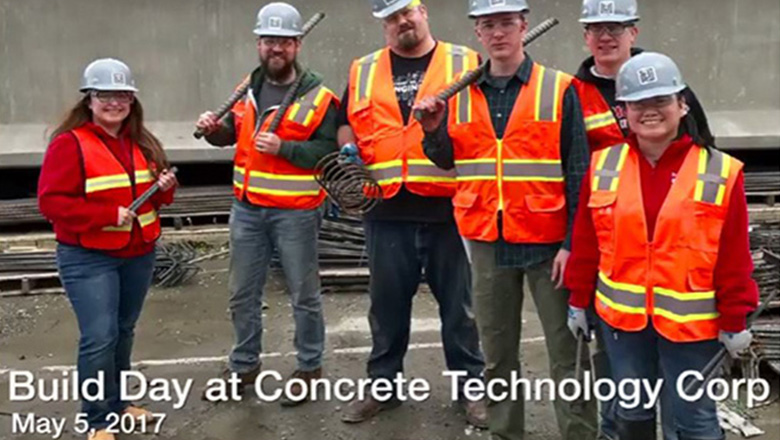 As part of the competition, the Saint Martin’s students fabricated and submitted a prestressed concrete beam. Their beam, named “Kraken Again” in honor of Saint Martin’s second-place-winning entry from last year, “The Kraken,” was constructed with the help of the team’s sponsor, Concrete Technology Corporation (CTC) of Tacoma. The first-place finish earned the team a monetary prize of $2,000 in addition to free travel, accommodation and registration for the 2018 PCI Convention in Denver, Colorado. Saint Martin’s concrete beam scored 61.75 points, followed by Oregon State University’s second-place entry at 61.25 points.

“I am very proud of the civil engineering students and the civil engineering faculty for winning this prestigious national competition,” said David Olwell, Ph.D., dean of the University’s Hal and Inge Marcus School of Engineering. “Dr. Jill Walsh has done an outstanding job as team faculty advisor. The success of the students also reflects the outstanding instruction on STEM fundamentals and communication that they receive from the mathematics, physics, chemistry and liberal arts faculty. We also greatly appreciate the Concrete Technology Corporation of Tacoma (especially Mr. Austin Maue) for their support of the construction of the actual beam.”

“Concrete Technology Corporation was excited to see the success of the students at Saint Martin’s University in the recent PCI Big Beam Competition,” said Austin Maue, design engineer at Concrete Technology Corporation. “That is a great accomplishment and one to be very proud of. I see this as a win for the school and a win for the industry. Not only do the students gain a tremendous amount of experience and confidence in their calculations, but they can bring this knowledge of prestressed concrete with them as they go out and begin their careers.”

The annual contest requires each team to design and fabricate a precast/prestressed concrete beam to contest specifications, then test it until it fails, measuring the actual results against their pre-test calculations and other factors. After testing, teams send their results to PCI, where they are judged on several factors, including efficiency of the design and the beam’s highest load capacity.

“This competition incorporates design, analysis, construction, report writing and large scale testing,” said Walsh. “Using calculations to predict behavior, students are in essence testing themselves and their knowledge when testing the beam to failure. The students emerge confident in the equations they learn in the classroom and get an understanding of how their plans need to be representative of what they intend to be built. This valuable, real world experience enhances their engineering confidence and makes them highly competitive when they enter the work force. Saint Martin’s is proud of our students, their hard work and dedication. We are grateful to CTC for being our industry sponsor and to the University of Washington for allowing us to test in their laboratories. We are humbled to be included in this PCI competition with so many highly regarded schools.”