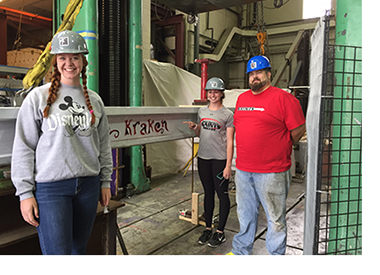 For a hardworking team of Saint Martin’s University civil engineering students, several months of planning, building and testing ended triumphantly when the team’s 17-foot-long concrete beam bested all but one of the competition in the annual Big Beam Contest.

The Saint Martin’s team placed second in a matchup against major universities from across the nation, taking home a monetary prize of $1,750 and a lot of pride in their growing professional ability. Results were announced Aug. 10 by PCI, the Precast/Prestressed Concrete Institute, contest sponsors.

“The engineering faculty and staff are thrilled with these results! This was the first time Saint Martin’s had ever entered the big beam contest, and we came in second of the 29 teams,” said David Olwell, Ph.D., dean of the University’s Hal and Inge Marcus School of Engineering. “This win, together with our first place finish in the SEAW Timber Frame Design competition earlier this year, emphatically underscores the quality of our students, faculty, and programs.”

The annual contest requires each team to design and fabricate a precast/prestressed concrete beam to contest specifications, then test it until it fails, measuring the actual results against their pre-test calculations and other factors. After testing, teams send their results to PCI, where they are judged on several factors, including efficiency of the design and the beam’s highest load capacity.

Saint Martin’s team members, who worked on their beam during their spare time, gave it the pet name of “The Kraken.” The Kraken scored  58.25 points, bested only by the University of Notre Dame’s score of 62.25.

Team members were William J. Miller III of Creswell, Ore., who served as project manager; Micaylla O’Leary of Bremerton; Madeline Knecht of Gig Harbor; Jessica De Boer of Meridian, Idaho; Anthony Merlino of Maple Valley; and Kyle Howlett of Auburn. Both Miller and Merlino recently graduated. Their teammates are members of the class of 2017 and hope to compete next year, said team advisor Jill Walsh, Ph.D., P.E., assistant professor of civil engineering. Walsh advised the winning teams in both the Big Beam and the Timber Frame Design competition.

Walsh said, “This is truly a great accomplishment for a first-year team to get second place in a national competition. I couldn’t be more proud of the students. It’s one thing to do the calculations and run the numbers, but when you have a chance to build something, test it to failure and compare the results to your predictions, it gives the students a greater confidence in the equations and hence their designs as they become professionals.”

She said she is especially appreciative of Concrete Technology Corp., in Tacoma, and CTC Design Engineer Austin Maue. When her team began the beam challenge in November, CTC became its member sponsor. The business not only provided space for the team to construct and pour the beam but also paid for all the materials and for the beam’s transportation to the University of Washington, where it was tested.