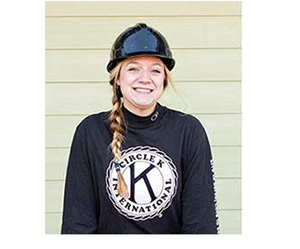 The Saint Martin’s University chapter of Circle K International has returned home with a bounty of individual and club awards, including the Humanitarian Award, from this year’s international convention in Toronto.

Circle K International is a collegiate service organization associated with Kiwanis International, the well-known service group. Saint Martin’s Circle K club has about two dozen members. They are part of the organization’s 12,000-strong membership on 500 campuses worldwide. “Circle K International works to develop college and university students into a global network of responsible citizens and leaders with a lifelong commitment to service,” said Toni Christy, president-elect of the Kiwanis Club of North Thurston and advisor for the Saint Martin’s group.

“The purpose of Circle K International and our SMU Club is very much in line with Saint Martin’s Benedictine values and the University’s mission focus of faith, reason, community, and service.”

At the June convention, Bailey Cammann, past-president of the Saint Martin’s group and a June graduate in biology from the University, was presented with the Humanitarian Award, which recognizes one individual annually whose efforts on behalf of others have significantly contributed to the betterment of the world.

Christy said Cammann is a person who translates her passions into service: “Her presidency has been all about action: Environmental justice – beach clean-up, highway clean-up and habitat restorations; social justice – homeless vulnerability indexing and working with domestic abuse survivors; and economic justice, through Habitat for Humanity. Bailey does not operate with limitations; instead, she approaches each stage seeing the big picture and potential for success.”

Cammann, of Star, Idaho, said, “Many people question why a college student would want to spend what little free time they have doing community service. I cannot answer this for everyone, but for me, it is being able to go to a low-income living facility and be able to see on the individual’s faces the difference you are making in their holiday season. It is making friends that I would never have met had it not been for our mutual love of service. And lastly, it is the ability to inspire others to find their own love of service.”

Cammann also was the recipient of the Circle K International Orator Award for her speech about meeting and working with the mother of the club’s past president, Brandon Pellerin, who died in a car accident.

-Club President Kenna Fosnacht, a senior majoring in biology who lives in Rochester, received the John E. Mayfield Circle K International Scholarship. She also was chosen as a PATH leader for the Large Scale Service Project, an undertaking that involves convention-goers in a service project to benefit the convention’s host city.

“I am so proud of each of our members and the time and energy they have dedicated towards service,” Fosnacht said. “As I look forward to this coming year I am excited for all that our club hopes to accomplish and the impact that we can make in the lives of others.

Other awards received by the Saint Martin’s club were: