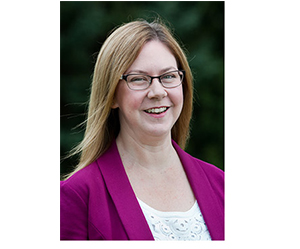 Katie Wojke, assistant vice president for institutional advancement at Saint Martin’s University, has been named as one of 2016’s 40 Under Forty leaders by the Business Examiner Media Group. The program annually honors emerging business and community leaders under the age of 40 for the meaningful accomplishments and contributions they are making to their businesses, industries, organizations, and communities. Wojke and other recipients will be honored at an Aug. 17 event at Tin Can Alley in Tacoma.

“It was an honor to have been nominated and quite humbling to be selected and included among such a talented group of people,” Wojke said.

Wojke came to Saint Martin’s in 2008 as an advancement officer, and from 2010 to 2011, was the University’s director of development. As assistant vice president since 2011, she plays a key management role in institutional advancement, alumni relations, and special events. Her work has been instrumental to successful fund drives and initiatives for Saint Martin’s new engineering building and its soon-to-be-opened industrial lab. She also serves on the executive committee for the annual Gala, a thriving University fund-raiser for student scholarships.

“I am honored to have Katie on our team, and grateful the Business Examiner is recognizing her as a top 40 Under Forty leader,” said Cecelia Loveless, the University’s vice president for advancement. “Katie is the type of person who takes action. She puts energy into making a difference for our students, alumni, and team at Saint Martin’s University, leading to positive results. She has been instrumental in creating and sustaining regional alumni events and plays a key role on our development team. Katie’s actions motivate people to get excited about the work of Saint Martin’s University and bring people together toward a common vision. I have no doubt she will continue to accomplish great things for our local community.”

Wojke has a master’s degree in nonprofit leadership from Seattle University and earlier earned a bachelor’s degree in communications/public relations from Washington State University. Before coming to Saint Martin’s, she served as director of development for Bellarmine Preparatory School in Tacoma.  She and her husband Jim and daughter live in Olympia.