The Rhino Ride Project is coming to Olympia! 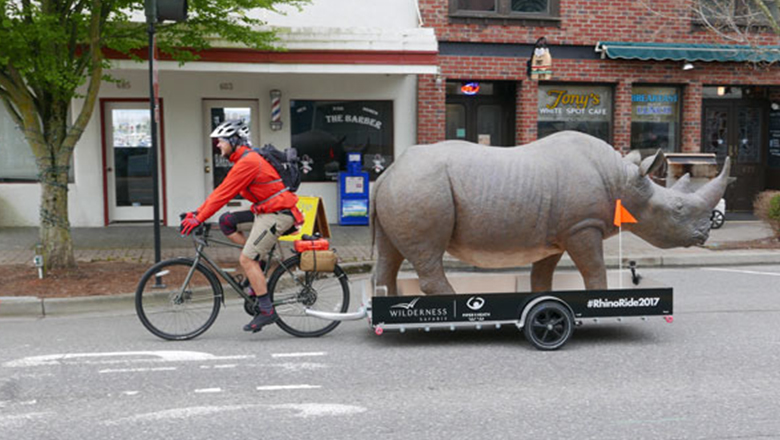 This Spring, Matt Meyer will travel from South Africa to cycle nearly 2,000 miles from Blaine, WA to San Diego, CA pulling a life-sized rhino statue, stopping in various communities along the way.

He will be pedaling thru Olympia on April 24th!

The aim of the Long Ride to Free Them is to raise funds and create global awareness for the current poaching crisis on rhinoceros in Southern Africa. In doing so, to shed light on this urgent dilemma that involves rhinoceros and other keystone species worldwide. By bringing this issue to the forefront we strive to make a more positive impact in the way we interact and affect our natural world.

One evening around the campfire, Matt (cyclist) and Chris (sponsor) were having yet another conversation about the plight of rhinos in African and what could possibly be done. Matt had seen where a man had walked a rhino a good long distance in South Africa to raise awareness about the plight of the rhinos. We started pondering if the same could be done here in the United States (still a large consumer of illicit wildlife products). From there the plan was born and local laws, logistics, and advice led to the walk being changed to a ride. This way we could cover more ground and do it within the road use laws of the US.

For guys like Matt and Chris who grew up with rhinos, the poaching crisis is very real. We wanted to have a symbol that would make the animal more tangible to people thousands of miles away from where the rhinos live. There are so many misconceptions about the rhino and by having a symbol that closely resembled the real thing, even just in size, we felt it would lead to a stronger message. Our rhino, as with the real thing, is an imposing creature and it forces one to wonder how such a formidable beast can be made so vulnerable by the actions of man.

The west coast of the United States is home to some of the most intense illicit wildlife trade in the US. It is also home to a huge population. The base of operations for Piper & Heath Travel (sponsor) is in San Diego. We realized there would be significant late night garage tinkering to ensure that our equipment was as good as it could be. All of these things made the west coast the ideal location for our first Long Ride To Free Them.

It was late 2015 when Matt first brought this hair-brained scheme to Chris. Despite every attempt from Chris to talk some sense into Matt, in the end Matt’s relentless commitment to the cause turned this hypothetical project into action.

Matt Meyer – project initiator, safari guide, and the man who is dragging that rhino the entire west coast of the US.

Empowers Africa – project facilitator, fund managers, and all around supporter.

Our primary goal here is education and awareness. We would ask people to listen to our message, and to share what they learn as widely as possible. We have to change peoples’ perceptions about what it is wildlife means to us as a species. Rhinos are being made extinct purely as a result of man. The solution therefore lies purely with us.

Our secondary goal is to raise funds for the three recipient organizations in Africa. They are involved in anti-poaching efforts, animal welfare, scientific research, population monitoring, and other critical tasks across four countries. The work they do is hard, unpopular, difficult, strenuous, and often life-threatening. For those that care about rhinos, there are few things we can do as effective as supporting those who have made saving rhinos their life’s work.