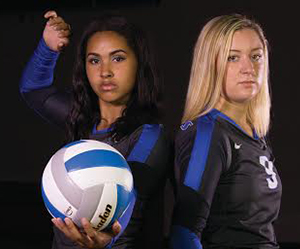 After a nearly a year of planning, recruiting, try-outs, and summer practices, SPSCC Athletics’ newest recruits prepare to hit the field (Men’s Soccer) and the court (Women’s Volleyball) in just a few short weeks.

The Men’s Soccer team is entering its second season under Head Coach Chris Crowe,  who previously held the position of Assistant Coach for four years. With only six returning sophomores and the rest new recruits, Coach Crowe expects that the young and eager team will force the competition to bring everything they’ve got to the field.

The first ever season of SPSCC Women’s Volleyball debuts this fall, led by Coach Melanie  Miller. Prior to joining SPSCC in early 2016, Miller was the Assistant Coach for the Clark College Women’s Volleyball team. Coach Miller expects that the excitement and camaraderie of being a brand new team will take the ladies far in the division.