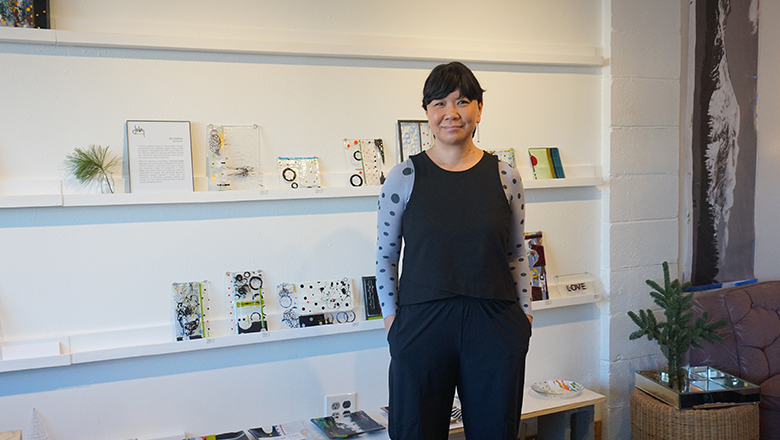 When Governor Jay Inslee asked Olympia artist Joby Shimomura to create a unique glass token for his inauguration, she was honored. 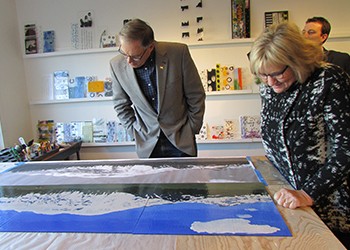 Governor Jay Inslee and Trudi Inslee at Joby Glass, viewing the Mount Rainier Inaugural Project before it was cut into 250 pieces. Photo courtesy of Joby Shimomura.

The governor wanted a gift he could give to those who helped make his first term a success, and together, Shimomura and Inslee planned the project.

Shimomura knew that Mount Rainier should be the basis for the work because it is a favorite of Inslee’s, which she learned when she was Inslee’s chief of staff.

We will tell you more about the piece she created for the inauguration, but first — as part of our Business of Art series — we’d like to tell you how Joby Shimomura began a successful career in politics, left politics and entered the world of art. 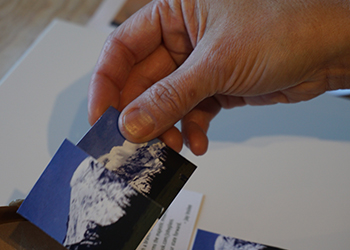 Self-Educated in Seattle
Joby was born in Lawrence, Kan., and grew up in Seattle. As a teenager, she was active in politics. She admits that she wasn’t an engaged student, preferring to spend her time on projects she loved — especially in the political arena. She applied to Georgetown University with no backup plan, so when she didn’t get in, she wasn’t sure what to do next.

Joby said her father gave her the best advice she’d ever received.

“He told me that I didn’t have to go to college in order to live in an exciting town,” Joby said. “He told me I could just live there.”

It was a life-changing moment.

Joby realized that she didn’t want to go to college. She wanted to live and work in Washington D.C. In 1990, just out of high school, she moved to D.C., crashed on a friend’s couch and started looking for a job. She had a lot of interviews, but no offers. One well-intentioned person told her they received hundreds of outstanding resumes every day — many candidates fresh from the nation’s top universities armed with amazing internships and connections — and she would need to find another way in. 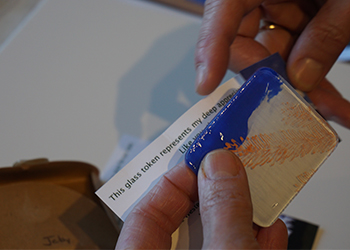 The Inauguration project started with a photo of Mount Rainier. Joby enlarged the photo to 17″ x 60″ and placed three sheets of glass on top of the photo and began to paint the glass. Next, she fused each of the three glass panels in the kiln. She then cut the large piece into 250 individual pieces, smoothing each edge. Finally, she stamped the pieces with the branch of a hemlock.

“It was an important insight,” she said. “I quickly learned that I needed advocates promoting me in order for doors to open.”

Find people who will advocate for you
A few weeks later, with the help of connections she had cultivated in Seattle, she received a job offer from Congressman John Miller, R-Wash., and became an assistant to Miller’s press secretary.

“It was a wonderful experience,” she said. “I was surrounded by smart and interesting people far from home. I could not have imagined anything better.”
Joby — then only 18 years old — had landed a fast-paced, interesting job in a field she loved with no college degree.

Know thyself
Two years later, after a fun-filled stint in D.C., she was back in Seattle working for a small media management firm. Joby had an insight about herself that sent her in another direction.

“I realized that it was in my nature to get an itch every two years and would need to change jobs,” said Joby. “That a long-term career in one place wasn’t for me. I’d just finished working on [Seattle Mayor] Norm Rice’s campaign as a volunteer, and I realized that I liked the work. I liked working on campaigns.” 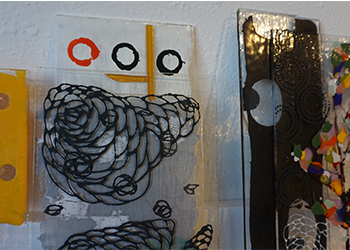 She enjoyed the short-term, fast-paced work campaigns offered and dove in full-time. She worked as a field director for the anti-601 and 602 tax initiatives. She worked on a school levy race. She managed a city council campaign and then ran a house race. She developed a track record. People began to know her work.

One thing led to another and in 1995 she found herself sitting in a café on Queen Anne with Jay and Trudi Inslee. Three hours later, she walked out of the meeting thinking she would do anything for these people.

“They are the best human beings and so authentic,” said Joby.

For the next 20 years, Joby worked on and off for Jay Inslee. First, running his campaign for governor, later on, his campaign for Congress. She was his chief of staff in D.C. for six years.

By 2005, she took some time off to explore other options. 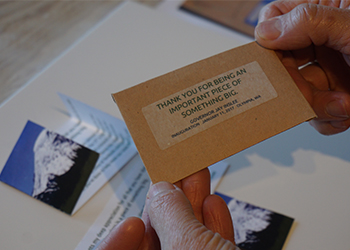 She had taken a class to learn how to create stained glass and developed it as a hobby. She realized she wanted to try making glass full time. She found a space in Pioneer Square and opened a studio.

“I had no plan, but I did have an awesome community there,” she said.

Eventually, she was pulled back into politics and put glass on hold.

“Republicans fronted a candidate [James Watkins] against Inslee in 2010, so I started working on his re-election campaign,” said Joby. “He came out of the campaign very strong and decided to run for governor in 2012.

“That was an extremely difficult process. He asked me to be his chief of staff and I said, ‘no,’ and became a senior adviser instead.”

Joby was living on a houseboat in Seattle’s Portage Bay and commuted to Olympia until Inslee’s chief of staff decided to make a career change.

“It made sense for me to step into that role,” Joby said. “I was Chief of Staff for two years and it has now been a year since I left.”

Act 2: A Glass Artist in Olympia
For the first six or seven months after leaving politics, she said she traveled and did little else.

“My time off was so rejuvenating, Joby said. “This past summer I started looking for [glass studio] spaces in Olympia and Seattle, and everywhere in between.”

She had moved to Olympia a few years ago after tiring of the commute from Seattle.

“The great thing about Olympia is its affordability and the supportive and creative community. It is easy to live here. It is easy to get around,” said Joby. “I have decided that it is better for my soul and anxiety level to live in a place I can afford and where I don’t spend half the time in my car frustrated. It is just close enough to the beach, to Portland, Seattle, and the airport.

“What will be interesting is to see what all the development does to downtown. What it does to the charming and interesting parts and if all the growth is sustainable.”

When she heard that the owners of the Little General were moving the store from 5th Avenue to Capitol, she knew that she wanted their old space. She got the keys and moved in mid-August and was ready for an open house by Arts Walk. By October, she had installed a kiln to make fused glass, having just taken a class.

Her first few months in the studio after moving in were busy preparing for the open house, getting ready for Christmas and — finally — starting Inslee’s time-consuming inauguration project, which she loved working on. 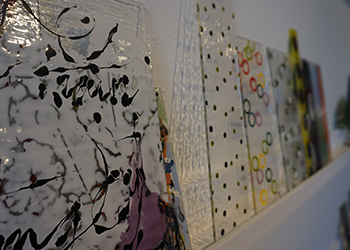 It started with a photo of Mount Rainier. Joby enlarged the photo to 17″ x 60″ and placed three sheets of glass on top of the photo and began to paint. Nine hours later, the glass painting was complete. Next, she fused each of the three glass panels in the kiln, each taking one day to fuse. Next, she cut the glass mountain into 250 pieces — like the pieces of a puzzle, only each the same rectangle shape, the edges ground smooth with a glass grinder. Each piece was cleaned and hand-stamped with a branch of Western hemlock — the Washington state tree. The pieces then went back into the kiln for another round of fusing. This process took three days. When the glass pieces were complete, she packaged each piece in a trifold card with an explanation of the project and a photo of the original painting. Inslee wrote on the card, “This glass token represents my deep appreciation for all you have done for our state. Like you, this glass is a piece of something big.”
The inauguration project celebrated the end of a process and a successful campaign, but for Joby, it marked the beginning of her next act.

“It is really nice to know that this is who I am. There is nothing better. I felt at one point that the political world was my calling, but in late 2011 a light bulb went off and I knew that I needed to be in a creative space that this — creating art — was where I wanted to be,” said Joby.

“It is liberating to be able to control what you are doing every day. Even after a long day of hard, and sometimes stressful, work you realize that it is a totally different kind of stress because this stress makes you happy.”●