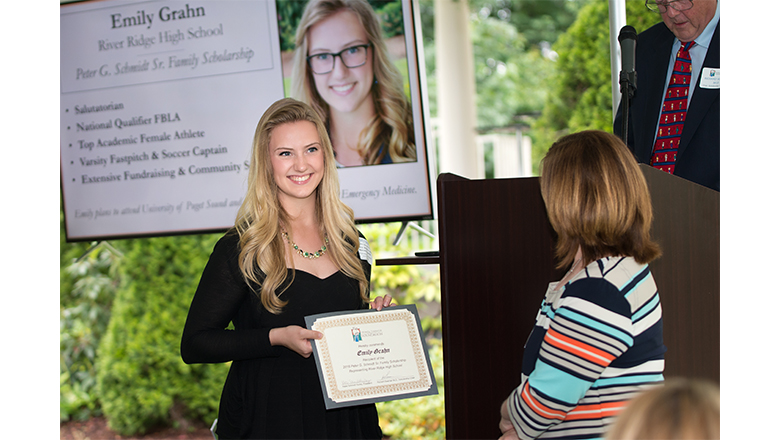 Photo Caption:  Katie Schmidt Hurley presents Emily Grahn with a scholarship in 2016. Grahn will return to Tumwater to speak at the May 30 Scholarship Reception at the Schmidt House.

The Olympia Tumwater Foundation (OTF) will host a ceremony to present $140,000 in scholarships to 17 graduating seniors from Thurston County high schools on Wednesday, May 30 at the Schmidt House in Tumwater. The awards range from $5,000 to $15,000.

OTF has awarded over $2.0 million in educational grants since 1967, making it the largest high school scholarship provider in the region.

The Olympia Tumwater Foundation, founded in 1950, is a local charitable organization that traces its roots to the Schmidt family of Tumwater and the famous Olympia Brewing Company.

OTF is best known for the pair of properties it owns and maintains for public use – Tumwater Falls Park and the historic Schmidt House. It is also acclaimed for its Education Program awarding scholarships and early learning grants.