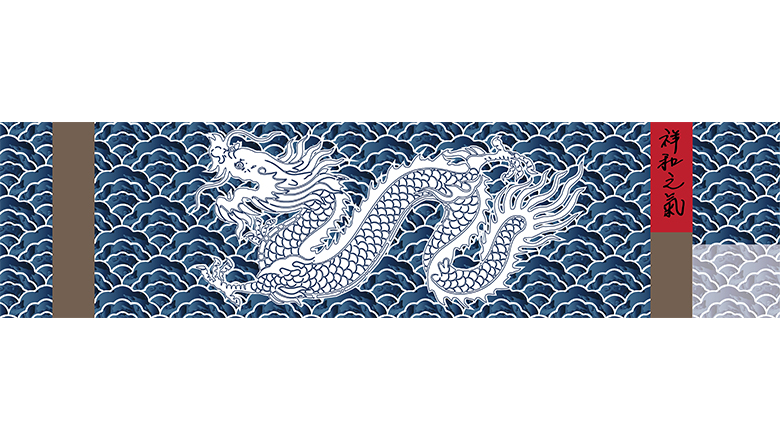 The public is invited to attend the dedication of the Olympia Dragon Mural at 12:00pm (noon) on Saturday, August 24, 2019 at the corner of 5th Avenue SW and Columbia Street SE in downtown Olympia.

This block-party styled event is free of charge and open to the public, featuring speakers and performers who will commemorate the early Chinese-American community that once thrived in this neighborhood. The mural presents a side-facing dragon against the waves of the sea. Along the right side is a red column based on a traditional scroll with characters that read, “peace, harmony, community”. The dedication will culminate with an ancient Chinese tradition of “dotting the eye”, or the final brush strokes of painting the eye to bring the dragon to life and to complete the mural.  A free commemorative program will be offered as a memento from this mural dedication and there will be complimentary beverages for attendees.  Food items will also be available for purchase.

The Olympia Dragon Mural,   located on the west-facing wall at the corner of 5th Avenue and Columbia Street was conceived as an artistic tribute to the once vibrant Chinese American business community that was located along Columbia Street.  In the words of muralist Mymy Nguyen:

“The dragon is a symbol of strength, ordinarily depicted in great detail – scales, skin, features, expression: a sense of intention and motion.  But in this dragon, we see only a silhouette – a ghost of the past strength, intention and motion of Chinese immigrants who left their homes, crossed the widest ocean, and came to Olympia for a better life.  This is where they built a community… As a new immigrant, I hear the echo of their experiences; I feel it in my bones…This mural is a tribute to them; a remembrance that mourns the absence of their lost community here, and honors their bravery”.

In January 2019, Ms. Nguyen presented her concept to a gathering of Olympians, including numerous Asian-American community leaders. Deeply moved by Ms. Nguyen’s vision, this group launched a plan to raise funds and secure a location for the mural on the side of one of the early Chinese-American owned buildings.  Major donors include: Chinese Healing and Movement Arts; Doug and Cathy Mah; the Tacoma Chinese Reconciliation Project Foundation Board; Aikido of Olympia; Heritage Bank; the City of Olympia; South Puget Sound Community College Foundation; Thomas Architecture Studio; Olympia Downtown Alliance and others. Together, these volunteers and donors, along with the artist and her dedicated mural team have created the Olympia Dragon Mural as a touchstone for all of Olympia, offering us a chance to reflect on the past and celebrate the present.

Among the committee members is Brian Lock, whose family once owned the building where the mural is now located.  The Lock family were among the Chinese-American business owners in the early days of Olympia. An excerpt from the City of Olympia’s website history page states that soon after the early European immigrants had arrived in Olympia,

“… in the mid-1840s, Chinese immigrants arrived in the city. Many found work as contract laborers. They built bridges, pulled stumps and graded streets in downtown. Others worked in lumber camps and harvested shellfish. Many Chinese became cooks, house servants, operated hand laundries, or cultivated vegetables and delivered them door to door.  Early on, Olympia emerged as a “Locke Town.” Olympia’s Chinese residents were predominantly from the Lok family villages near the town of Seuibo in Toisan County of Guangdong Province in southern China.”

More information about the history of the early Chinese-American community can be found on the web at:   http://olympiawa.gov/community/about-olympia/history-of-olympia-washington/olympia-s-chinese-community.aspx

The Olympia Dragon Mural expands the list of over 80 works of public art on the walls of downtown buildings, solidifying Olympia’s growing reputation as a City of Murals. An online walking map of these amazing artworks can be found on the Olympia Downtown Association’s web page:   https://downtownolympia.org/Olympias-Mural-Map