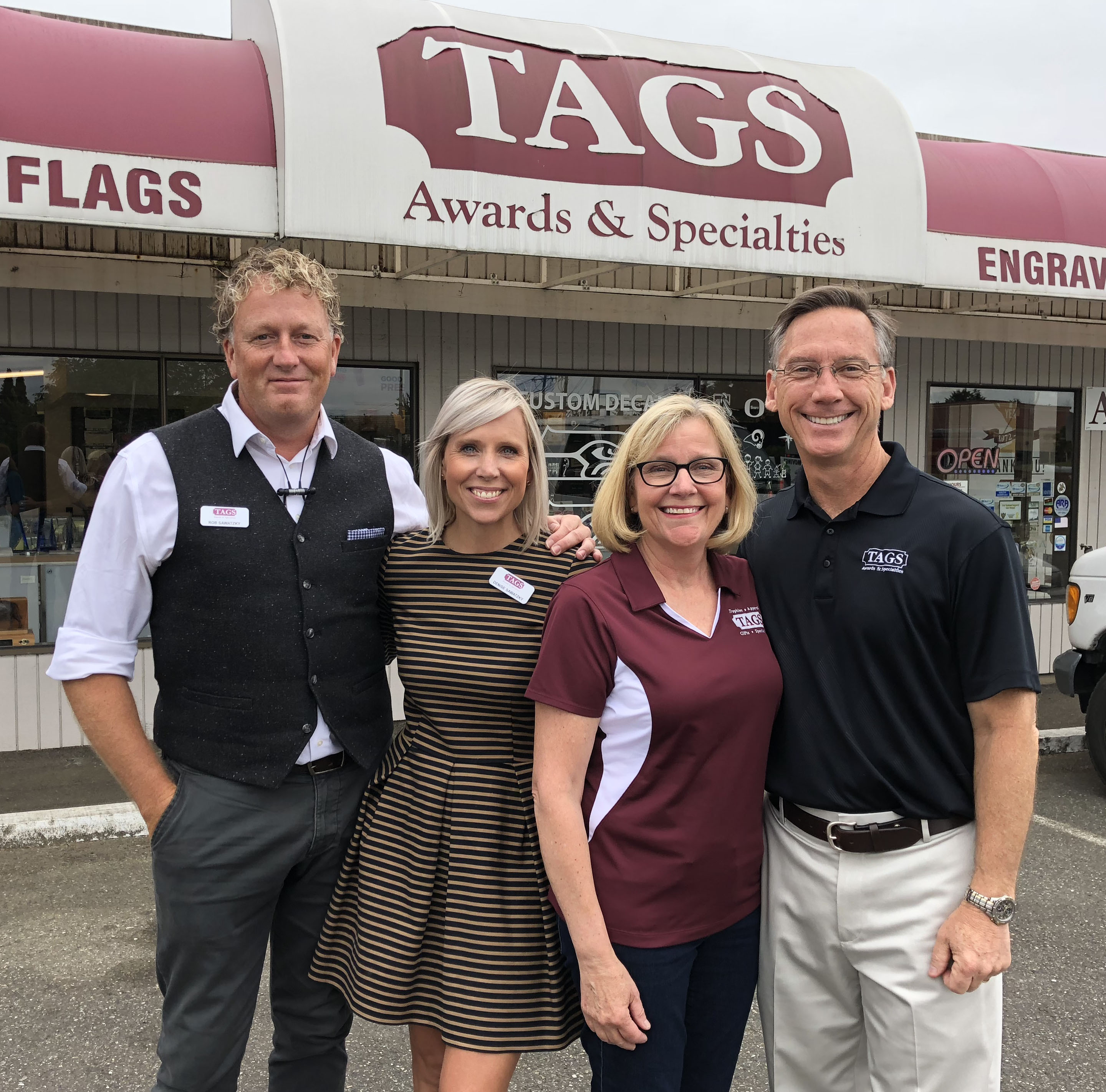 Mike and Brenda Williams, pictured with prior owner Carl Salstrom.

After owning TAGS Awards & Specialties for 17 years, Mike and Brenda Williams have sold the 46-year-old business to Rob and Denise Sawatzky from Olympia. The sale was completed on June 6. The Sawatzkys are local Olympia residents who liked TAGS’ longstanding solid reputation for quality and service and they anticipate continuing that tradition.

” This is so exciting for Rob and I,” says Denise. “We are grateful for the opportunity to take ownership of a business that has demonstrated such care for relationships and partnerships. We look forward to carrying on the community connection that Mike and Brenda and the employees at TAGS have nurtured for so many years.

“Denise and I have been together 26 years and here on the eve of our 24th wedding anniversary, we have the opportunity to be in business together and with the exceptional staff at TAGS”, said Rob.  “We hope to expand business by introducing outside sales as well as online sales expansion.

Rob also added “Denise will be running the day to day operations and I will have an advisory and support role at TAGS. Denise and I have developed relationships over the years with a plethora of businesses on the west coast, all which have needs for promotional items, gifts and awards that are branded.  So we see a significant upside to growing the business in this way.”

Denise concluded by saying “Mike and Brenda and the staff have made a difference for the community, Rob and I are honored and privileged to be continuing down this path.  We have big shoes to fill!”

Mike and Brenda Williams were the business’ longest term owner, having purchased TAGS from Carl Salstrom in September, 2001. The business was started by Orville Armstrong in 1972. TAGS grew significantly during the years the Willamses owned the company.  In addition to being a leader in awards and engraving, the couple has added significant promotional item and custom apparel production and sales.

“We are thrilled to be leaving TAGS in such good hands,” said Mike.  We can tell that Rob and Denise will bring great energy, enthusiasm and sophistication to the business, and they can take the business to another level. We have been grateful for our terrific staff, and with them continuing in place, our customers can know that they will always be served well.”

“We have so many memories associated with owning TAGS,” said Brenda. “We took over on September 1, 2001, and ten days later 9/11 took place.  Because we were one of the few places to sell flags back then, we were inundated with flag sales.  People were lined up out the door!

“We will miss everyone on our team, they are like family,” continued Brenda.  Four of them have worked for us during all the years we owned the business and they have been terrific.  We are also thankful for our son Henry who has managed the business so well over the past several years.  Everyone on the team has worked so hard, and we have had a lot of fun together.”

This transition is expected to be seamless for customers and staff, with Mike, Brenda and Henry all staying on for several weeks to assist.