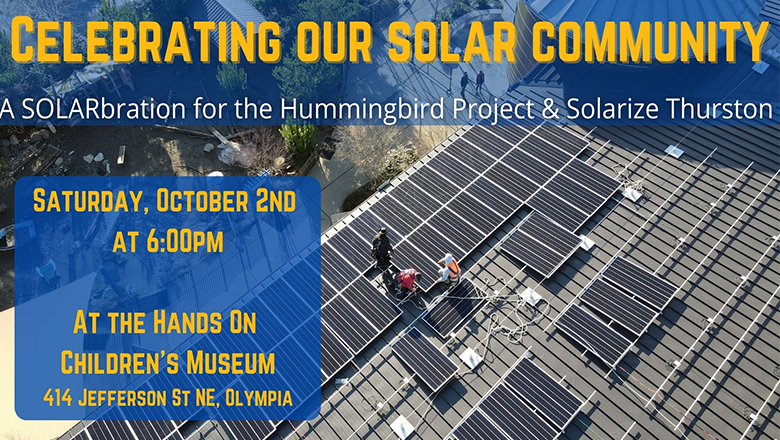 Washington residents interested in solar power now have the opportunity to buy into the market at a fraction of the cost.

Olympia Community Solar (OCS), a nonprofit founded in 2018 to support community solar education and policy, recently installed The Hummingbird Project, a community-funded solar project on the roof of the Hands On Children’s Museum that will save the museum hundreds of thousands of dollars over the 40-year life of the system.

Individuals, groups, and businesses purchased portions of the project, known as solar units for $300 apiece. Each participant will receive a payment each year based on the amount of energy generated by their units until the full purchase price has been refunded. Individuals also donated solar units to one of the partnering nonprofit organizations. Once the total cost of the system is paid off the solar array will be donated to the museum.

“When people purchase solar units, they’re purchasing the production of the solar panel for that system’s lifetime,” OCS President Mason Rolph said. “As the system generates energy each year we calculate each participant’s share and send them a check for that value.”

Each unit will prevent the release of about 150 pounds of carbon dioxide into the atmosphere each year, according to Rolph. He likened the idea to that of a community garden, where individuals are responsible for a small plot within the larger landscape over the course of the season, then share in the communal benefits.

Olympia Mayor Cheryl Selby praised the work of OCS to use a model for the solar project that eliminates the major cost barrier that prohibits most people from putting panels on their own buildings or residences. The city leased space on the museum roof to OCS last August to allow for the plan to go forward.

“This is just a great story of partnership around our climate goals and also helping a community asset be ready for the next 40 years,” Selby said. “The Children’s Museum is a keystone of our downtown and even though it’s not open for our enjoyment right now, it will be in the future, and it’s showing our community that we’re not letting the COVID crisis slow us down on important projects.”

The inspiration for the project came from a unique source far outside the Olympia city limits.

Kenyan activist Wangari Maathai often told the story of a hummingbird that used its beak to carry small amounts of water to help put out a forest fire. When other animals asked what the bird was doing, it replied, “I am doing what I can.”

Maathai, who in 2004 became the first African woman to win the Nobel Peace Prize, used the story to illustrate how minor actions taken in the face of a major challenge such as climate change combine to have a significant impact.

“Our organization is all young 20-something year olds who are motivated to address the climate crisis,” Rolph said. “We did a couple surveys prior to releasing the offer, and people said by far that they wanted to do it for climate reasons. The second-highest reason was because they could participate at a lower cost than what it would take to get traditional solar on their homes.”

“We designed the building intentionally for solar panels,” Belmonte said. “What happened in the early years is when we went to put solar on the building, we didn’t qualify for some of the grants available for solar projects because the building was already energy efficient. We’re delighted to be at this place now to be part of a community solar project.”

The solar array will be used for educational programming put on by the museum. Solar energy has been a component of the summer slate of activities at the museum since it opened its current Jefferson Street location in 2012. Belmonte highlighted examples such as solar ovens that can provide portable demonstrations of solar power.

Museum staff are working to find additional funding to construct a station inside the building that features the rooftop installation. Belmonte said the plan since 2012 has been to connect the solar panels to a display in the museum lobby that shows the amount of energy being generated in real time.

For more information about The Hummingbird Project and the new Sunflower community solar project, visit www.olysol.org.