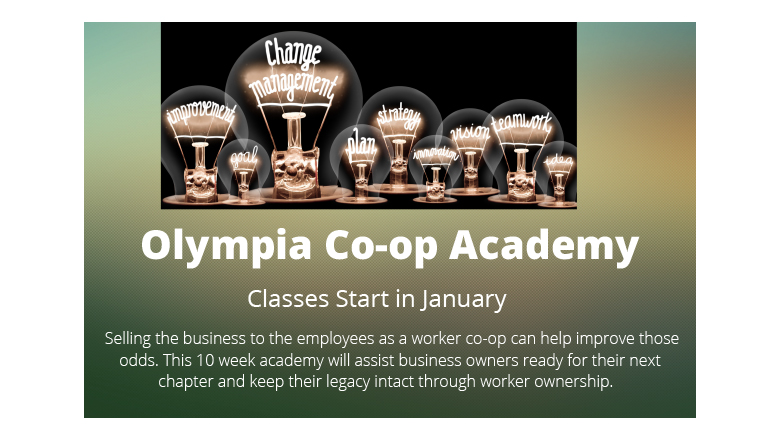 The Northwest Cooperative Development Center (NWCDC) launches  recruitment for a co-op academy aimed at helping five local businesses transition to cooperative  ownership in 2022. In partnership with the City of Olympia, NWCDC will be offering a Co-op Academy  focused on converting Olympia businesses to cooperative ownership either as a worker cooperative or a  multi-stakeholder cooperative. Information sessions will scheduled shortly.

Over the last decade, Olympia has seen a wave of worker co-ops and joins New York, San Francisco,  Oakland, and Philadelphia as one of a handful of cities in the US with more than a dozen worker owned and operated businesses. Beloved and long-term businesses in the downtown such as New Moon Café (converted in 2013), Dumpster Values, Burial Grounds, and Orca Books converted to cooperative  ownership in the last five years. John McNamara, coordinator of the academy for NWCDC notes, “These  businesses not only keep local jobs thriving in Olympia, they also maintain part of Olympia’s unique vibe  and character in the downtown.”

According to Project Equity, 85% of business owners do not have a succession plan and in Washington 49% of small business owners are over 55 years old. Now, as the community rebuilds and Covid-19  recovery efforts drag on, the need to create resiliency in the economy is more important than ever.  Conversion to a cooperative business provides a means of maintaining existing Olympia businesses and  building a long-term recovery.