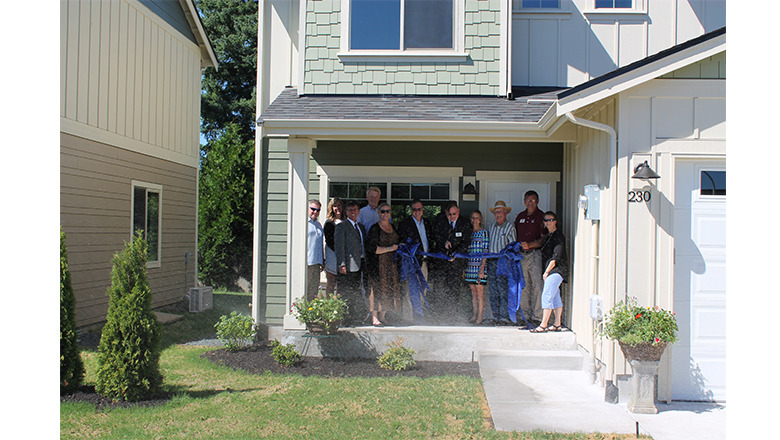 July 31, 2017 was a “blue ribbon” day for Tumwater School District and the Housing Authority of Thurston County as a new partnership is officially formed at the ribbon-cutting ceremony for the new Allen Orchard housing development on Dennis Street in Tumwater. This partnership encompasses the vision of many.  With several units of the 24-unit development reserved for some of Tumwater School District’s McKinney-Vento qualifying families, a seed of hope has been planted for these families.

The conversation started when Housing Authority Board Member Neil McClanahan visited with Tumwater School District Superintendent John Bash and they had a “What If” conversation … “what if” we could partner and help some of our neediest families, “what if” we could reserve housing for families of Tumwater School District, “WHAT IF?”  From there, others were brought into the conversation as the new housing project, Allen Orchard, was starting construction.  Housing Authority Executive Director Chris Lowell shares, “The concept of providing housing – with services – has been a goal that the Housing Authority of Thurston County has viewed as a high priority. It has been demonstrated for many years through existing communities in the County that combining housing with services has greatly enhanced the success rate to achieve self-sufficiency for at-risk households. The construction of Allen Orchard began in August of 2016 and is on schedule to be occupied in August of 2017. The Allen Orchard project totals 24 twin homes, including ten 3-bedroom units and 14 2-bedroom units. This community was designed to provide work force housing along with housing for homeless and at-risk households. When the conversation started regarding reserving units for Peter G. Schmidt families, we were excited to reserve some of the units for PGS families that were currently homeless.  Case managers staffed at the Housing Authority will be working on-site with families in conjunction with counselors and staff from Peter G. Schmidt Elementary, which is directly across the street. It is the vision of this blended community to stabilize the children and watch them grow physically, emotionally, and academically from elementary school through high school and hopefully through higher education.” Peter G. Schmidt Counselor Sidney Reid worked closely with the Housing Authority in identifying potential residents for Allen Orchard. As she reflected on the process, Sidney said, “This has been a very rewarding process, but very hard at the same time. Through this process, families have opened up about their specific situation. Trying to prioritize six families to refer to the Housing Authority as those ‘most in need’ was very difficult. But also through this process, we were able to provide other services to families that we didn’t know needed them. I have heard time and again how PGS has been so supportive … I am proud to be a small part this great community and I am extremely thankful for this amazing new partnership with the Housing Authority. I can’t wait to see the results!”

Research shows that when a student’s basic needs are met – food, clothing, housing, etc. – they are better able to arrive at school ready to learn. We are excited about this new partnership that removes one of those barriers and will provide students the security of a home.