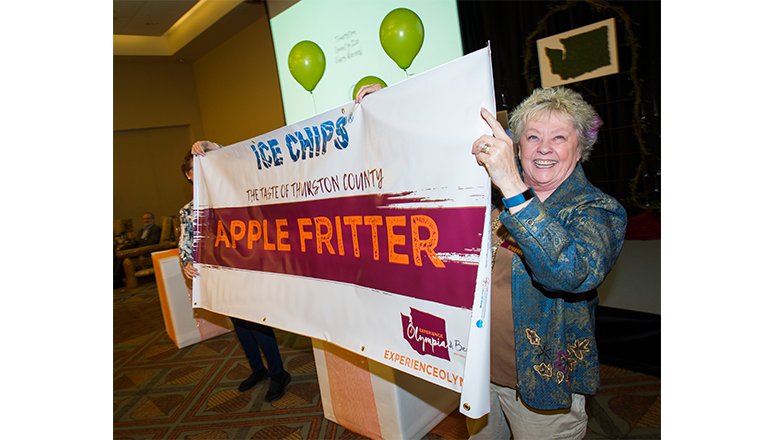 Apple, a hint of cinnamon and the perfect amount of sweetness. Thurston County loves the delicious taste of Apple Fritters, reminiscent of a trip down the Thurston Bountiful Byway with a stop at Lattin’s Country Cider Mill and Farm.

The Olympia-Lacey-Tumwater Visitor & Convention Bureau (VCB) celebrated National Travel and Tourism Week at their Annual State of Tourism Meeting. The VCB teamed up with the famous grannies at Ice Chips to make a candy that represents the flavor of the region and sent three flavors to a public vote.

The grannies helped announce the winning flavor Thursday afternoon at the meeting. Cheers from the crowd erupted after Apple Fritter was revealed as the winning flavor. Attendees got to take a tin home and the flavor is available for tasting in the Ice Chips tasting room in Tumwater.

“The handcrafted taste of Lattin’s Apple Fritters and their award-winning cider is just one of the one-of-a-kind experiences that visitors and locals can have in Thurston County,” said Shauna Stewart, executive director of the VCB.

The Thurston County Ice Chips flavor reveal was part of the VCB’s brand launch. The new destination brand was a year and half-long project that included extensive research with visitors and locals to identify what makes Thurston County unique and differentiates the area from other visitor destinations in Washington State.

“We set out to uncover what was already in the hearts and minds of our locals and visitors. We wanted to know how visitors perceive the destination. What we found is that we are a mindfully crafted destination with one-of-a-kind experiences, and that’s because of the passionate, remarkable people we have in this community,” said Shauna Stewart, executive director of the OLTVCB.

The brand launch includes a new name of Experience Olympia & Beyond, a logo, tagline, visitor guide, website (experienceolympia.com), marketing and more. The new brand is designed to inspire visitors to experience a handcrafted escape to Thurston County.