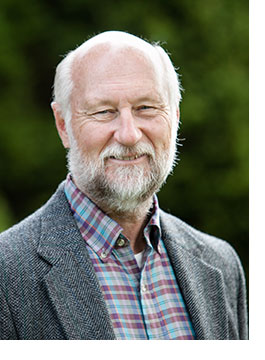 LACEY, Wash. —Politicians have always understood the American Dream and its power to win votes. With slogans like “a chicken in every pot,” “leave no child behind” and “vote yourself a farm,” they’ve promised that the dream Americans hold dear will be honored.

In his new book, “Seeking the American Dream: A Sociological Inquiry,” Saint Martin’s University Prof. Robert Hauhart, PH.D., J.D., explores the development of ideas that form the American Dream and our perceptions about it. The book, published by Palgrave Macmillan, New York, is based, in part, on an analysis of interviews with the homeless community in Olympia, Wash., conducted by Prof. Hauhart’s student Jessica Flores, a 2012 graduate in criminal justice.

Hauhart says that while Americans have put faith in the American Dream throughout its history, what it actually means to them varies and has changed over time. While studies weren’t done in the early years of the country’s existence, he has drawn from historical accounts regarding the colonists who emigrated to Virginia, Massachusetts and Pennsylvania and analyzed documents, including Massachusetts Bay Company Gov. John Winthrop’s speech reminding his followers that their lives would be displayed as a “city on a hill” for all the world to see. As the field of sociology developed in the late 19th and early 20th centuries, sociologists began studying the subject. In recent years, the topic has exploded, he says. Now there’s enough data on hand to actually measure how people view the American Dream, he says.

“This well-researched, historically-driven, and interdisciplinary study of an iconic motif, ‘the American Dream,’ that so permeates our culture and thinking will undoubtedly have a wide audience, not only among scholars in a number of fields but also among those in the general public worldwide who are keen to understand American culture and its contexts,” said Molly Smith, Ph.D., Saint Martin’s vice president for academic affairs.

By delving into past and current sociological research, Hauhart’s book provides a fresh historical perspective of the American Dream’s development and how the expectations we have of our country have changed over the centuries. The dream is cherished by many Americans but most especially by the middle class, Hauhart says.

“That is one reason we interviewed street people and the homeless. No one ever asks them what they think about the American Dream or if they possess a personal dream they are pursuing. Generally, many of our respondents from the street viewed the American Dream as rigged, a sham or an illusion,” he said. “Although they may not be Donald Trump supporters, the homeless seemed to share those voters’ view that they have been left out of the American Dream over the last couple of decades.”

Generally, the “dream” Americans consider as their birthright consists of the freedom to prosper and improve their circumstances through hard work and initiative. Most scholars trace this unspoken covenant between the country and its people back to the Declaration of Independence, which states “all men are created equal” and have “the right to life, liberty and the pursuit of happiness.”

Hauhart says the roots of the American Dream can be traced clear back to Winthrop’s 1630 “city on a hill” speech to shipmates bound for America.

“Our country is built on the idea of rugged individualism, the idea that each individual has to make his or her own way,” he says. “Every American knows about the American Dream. If you say the phrase around the world, people know what you’re talking about. As a sociologist, when something is that pervasive, how can you not think about it?”

Hauhart says he started studying the subject seriously a few years ago. In 2010, he and another University faculty member, English Prof. Jeff Birkenstein, Ph.D., taught an interdisciplinary course, “Chasing the American Dream,” that was so popular it has continued to be offered at the University.

What he has discovered through researching past studies and analyzing current data, including his own studies, is that the dream is “sort of impervious to reality,” even through the country’s ups and downs, Hauhart says.

“The American Dream is perfect. Its malleability permits you to reshape it,” he says. “It’s like high-jumping. You just lower the bar and reconstitute your dream with lower standards. It’s an amazing adaptability that our culture permits.”