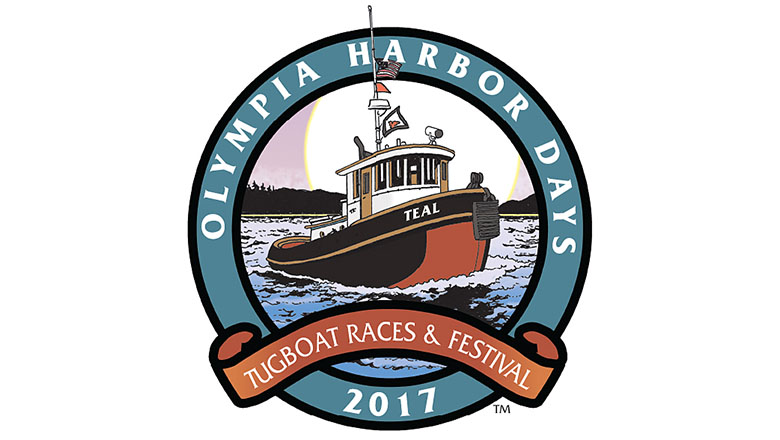 Olympia Harbor Days Tugboat Races and Festival, an Olympia Kiwanis Club non-profit event, is pleased to announce the Squaxin Island Tribe as the new Title Sponsor of the 3-day festival.  Olympia Harbor Days has been held annually on Labor Day weekend for 44 years at the harbor in downtown Olympia’s waterfront and is famous for holding The World’s Largest Vintage Tugboat Races.  Other major support for the free family-friendly event comes from the City of Olympia, the Port of Olympia and community sponsors.  Proceeds from the festival help the Olympia Kiwanis help kids in the community.  The festival dates this year are September 1 – 3, 2017.

“The Squaxin Island Tribe brings a rich cultural history with strong community connection and diversity to the festival”, says Carol Riley, Executive Director of the festival.  Members of the tribe including Ray Peters, Tribal Council Liaison; Charlene Krise, Executive Director of the Squaxin Island Museum; and Leslie Johnson, Director of Squaxin Island Tourism;  are working with Riley on plans to bring tribal elements to the festival, including an opening blessing and closing ceremony in Lushootseed, the native language throughout most of western Puget Sound.  Riley anticipates great involvement by the Tribe in 2017.

Known as the “People of the Water,” the Squaxin Island Tribe has inhabited the Olympia region for thousands of years with some artifacts dating to several thousand years old.  They are the maritime people who lived and prospered along the southernmost shores of the inland Salish Sea (AKA Puget Sound) for untold centuries, and still hold a strong cultural connection with the water including Budd Inlet, or Steh-Chass in the native language.  In 2012 they were the host to the Canoe Journey called Paddle To Squaxin.  As maritime people of the Salish Seas living by the marine tides continues to be an important way of life.  The Tribe works cooperatively with the State of Washington as co-managers of natural resources such as salmon and shellfish.

The Tribe was one of the first 30 tribes in the nation to enter into the Self-Governance Demonstration Project with the federal Government and now establishes its own priorities and budgets.  Today the Tribe is best known for its Little Creek Casino and Resort including the Skookum Creek Event Center; the Squaxin Island Museum Library; and Salish Cliffs, an 18 hole champion golf course designed by Gene Bates.  The Tribe created Island Enterprises, Inc. to carry out economic development functions for job creation and revenue.  Subsidiaries and related businesses now include several Trading Post gas stations and convenience stores, Salish Seafoods, the Ta-Qwo-Ma Business Development Center, Skookum Creek Tobacco Company, Skookum Creek Distributing and SI Distribution.