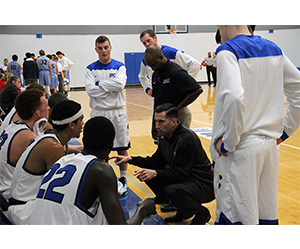 Just months after its best season in school history, Clipper Men’s Basketball launches a new program to root student-athletes in the Thurston County community. Partnering with businesses and members of the community, Clipper Athletics anticipates that the Hometown Hero Program will help student athletes from outside the Thurston area make local relationships that encourage athletic and academic success.

“A majority of our young men are not from the south sound,” said Athletic Director Nick Schmidt. “We have learned that when these young men have a local connection, they have a better experience as a student-athlete, and remember the impact that SPSCC had on them.”

Men’s Basketball Head Coach Aaron Landon gave an example of the success that community relationship makes on a student: recent SPSCC grad Tyler Watts, an Arizona recruit who played for Landon for two years. “Watts did everything. He worked on campus and off campus, connected with his sponsor about studies in sports medicine, and did great in school,” said Landon. “Now he’s graduated, along with every other sophomore from the past two years.” Landon stated that he’s extremely proud of the young men that are winning, graduating, and entering the community as exemplary people.

Athletics saw success with a small program in 2015-16, the 6th Man Club, which allowed businesses and individuals to sponsor a player on the men’s basketball team. The Hometown Hero Program seeks to expand that success by connecting more local sponsors with out-of- town student-athletes on a deeper level.

Clipper Men’s Basketball will host an event to encourage the community to build a local “family” of supporters. Individuals or businesses interested in learning more about the Hometown Hero Program are encouraged to attend. Coaches, players, and members of SPSCC Athletics will be present.

Or for more information on how to support Clipper Athletics, visit spscc.edu/campus-life/athletics.