Harlequin Productions & The Business of Art 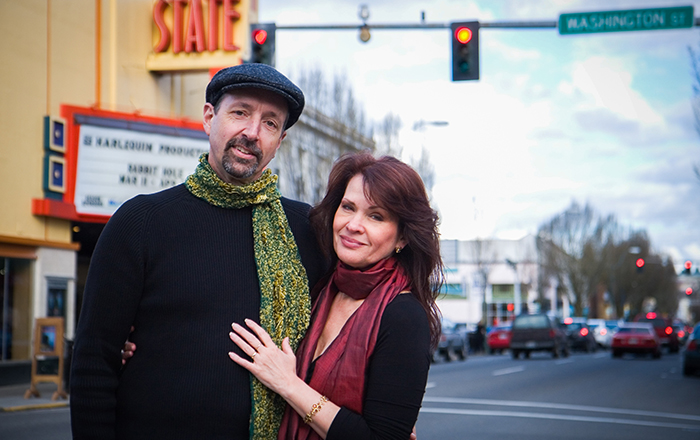 Anyone who might be on the fence about the importance of live theater only needs to sit down with Scot Whitney for a few minutes to be convinced. His wildfire energy when describing the power of storytelling spreads to his listener’s heart and mind.

This story was originally published in the March 2017 VOICE Magazine, written by Rebekah Finn 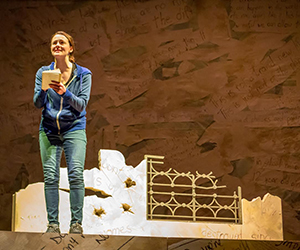 “There is a unique experience in [live] theater, where it’s completely different from watching a movie: you’re in the same room, breathing the same air, there’s an exchange of energy between audience and actors, and it is a safe place to experience much more dangerous territory than we normally have in our lives,” Whitney explains.

What theater offers is a chance to witness first-hand how another person might feel and think and live, thereby getting audience members out of their usual bubble to understand a different perspective. According to Whitney, this gets to the purpose of art: to broaden minds.

“I believe the ultimate gift of the theater is empathy.” And in a time when division abounds, and connection and compassion are in high demand, why not seek out a dose of empathy in our own backyard? 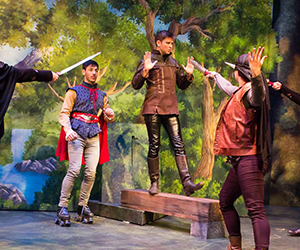 In 1991 Whitney set out with his wife, Linda, and three other people—James L. This, Phil Annis and Ronna Smith—to start producing plays that would simultaneously challenge and entertain Thurston County audiences. This group of five founders pooled their passion and their start-up capital (only $400!), and began producing plays on the black box stage of the Washington Center.

“Our productions started out small; we had very limited resources, but we had a lot of energy, a lot of talent, and a lot of really great people to work with,” Whitney recalls. “We put up one show, and it did well. So we did another one, and another one, and another one and produced six small plays in that first season.” They decided to offer subscriptions, and quickly got a starter group of 85 patrons. “The next year we doubled that, the next year we doubled that and it grew very rapidly.”

Within two years, it was evident that Harlequin Productions was outgrowing its rented space. Whitney started to contemplate what seemed to him like a crazy idea. When he finally told a friend what he had been thinking, his friend blurted out, “That’s perfect! I know it’s going to happen!” After multiple people reacted the same way, it confirmed what the founders had begun to realize: it was time for Harlequin Productions to buy and refurbish its own space.

“We revived a derelict building, and turned it into one of the best performance spaces in the state.” Whitney recognizes the challenge of keeping healthy activity alive and well in urban centers, and he is proud that Harlequin Productions is able to hold down a prominent corner of downtown Olympia. 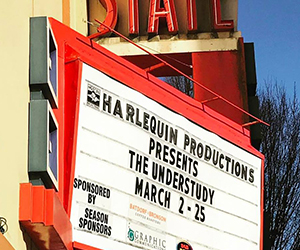 In the twenty years since 1997, Harlequin Productions has had years of fantastic ticket sales, and other years of operating in the red. What has enabled them to keep their doors open through tough economic times? The support of community members through sponsorships and donations. Looking ahead, Harlequin Productions is prioritizing a budget plan that will move its income from 65-75% ticket sales to a more even 50%-50% split between earned and unearned income.

How can businesses contribute to this needed art form in our community? Sponsor a show or event, advertise in the program or make a donation. Nonprofit organizations may also be eligible to participate in the Community Partnership Program.
How can individuals contribute? Attend a show! Plan a date night, or grab some friends and get down to the box office. If you’re low on cash, Harlequin offers various discounts, and you could even catch a show for free by volunteering as a front-of-house usher or ticket-taker, or a behind-the-scenes production crew member. The best way to contribute is to buy a subscription for the entire season, which comes with many perks like discounts and first pick of seats. You could also join the “Dr. Feel Good” club and get the VIP treatment at every show you attend.

Just like everything we do, the intersection between art and business happens within the individual person. We can contribute to a thriving Olympia arts community by being a patron of the arts, exploring something new and stretching our minds to connect with other human beings. ●