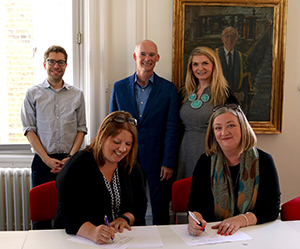 South Puget Sound Community College along with Goldsmiths, University of London has implemented a new articulation agreement for studies in Politics. The agreement allows qualified SPSCC graduates to transfer into Goldsmiths’ Bachelor of Arts in Politics program with advanced standing.

The agreement was formalized earlier this month when representatives from SPSCC met at Goldsmiths, University of London to sign the agreement.

This agreement offers numerous benefits to SPSCC graduates, including:

– Students aiming to attain a bachelor’s degree in Politics can swiftly enter into the program with advanced standing (meaning they will transfer into year two of the three-year program).

– Students seeking international experiences can enjoy studying in London.- Students get work experience as part of the degree; several students have been placed

– Students get work experience as part of the degree; several students have been placed in prestigious agencies, such as the Mayor of London’s office.

– Current exchange rates offer tuition levels that are comparable to local public universities, such as the University of Washington.

Interest in this agreement was sparked in spring of 2015 when Goldsmiths’ International Recruitment Manager, Ms. Louise Blair, contacted SPSCC. Blair met with Professor of Anthropology and Assistant to the President for Internationalization, Dr. Patrick Chapman, and concluded that an agreement for Politics would be a good fit. “We live in a globalized age and opportunities like these allow students to broaden their horizons and get a competitive advantage,” said Chapman.

This agreement adds to an already robust lineup of international articulation opportunities for SPSCC graduates, such as Business Administration with the Cork Institute of Technology in Ireland and Philosophy with Otago University in New Zealand. “I am very excited that SPSCC students can now transfer to internationally recognized universities and technical institutes in London, Paris, Ireland, and New Zealand,” said Chapman. He also stated that further discussions are underway to explore an Anthropology agreement with Goldsmiths, University of London.