Get Out and Spread the KombuchaLuv!

After the year we’ve had, a little pick-me-up is definitely in order. Kombucha is a growing trend that comes in many delicious flavors and contains beneficial probiotics and antioxidants to help maintain gut health and fight bacteria. Alcohol-free and delightfully fizzy, minority- and female-owned KombuchaLuv is brewed, bottled and distributed with love—or should I say LUV?—throughout Western Washington.

Kombucha, an ancient way of fermenting tea, is thought to have originated in Asia. During the fermentation process, bacteria and yeast produce acidic compounds which lightly carbonate the final product. It is then often mixed with juice blends to make a refreshing, healthy beverage enjoyed by all ages.

At first, Product Ambassador Talia Manū admits she wasn’t a big fan of kombucha’s tangy taste overall. But she met brewer Darnell Jones at an industry trade show and was intrigued by his mellow, flavorful product. She then brought in Virginia Rector, originally from Colorado but briefly visiting the Northwest, and their product family was born.

Almost two years later, they’re starting to regain their pre-COVID footing and ready to expand their footprint both regionally and physically. KombuchaLuv is available through many local retailers up and down the West Coast, and their Centralia taproom opens its doors this summer.

Originally brewed in Lakewood, the team has moved operations to a one-stop-shop in Centralia, where they hope to expand and grow. Adjacent to a day spa, the site was a former daycare, so its existing commercial kitchen means operations can proceed from day one. This summer, Manū, Rector and Jones are planning a celebratory ribbon cutting and grand opening. They hope to offer growler fills, bottled kombucha, locally crafted gifts and foods and perhaps a small café site from the taproom.

KombuchaLuv’s product is unique in that they use 9.5 alkaline water and Moringa Oleifera tea. Standard drinking water typically has a neutral pH of 7. Low pH numbers translate to high acidity, so using 9.5 alkaline water means KombuchaLuv doesn’t have the vinegar-esque flavor notes present in some kombucha products. “It tastes refreshing and clean,” says Manū. “Kids and athletes are our number one fans right now.”

The choice of Moringa Oleifera as their tea component also makes a difference. It is reported to contain protein, vitamins B6, C, and A and iron, magnesium, riboflavin and antioxidants. Studies show that it may also reduce inflammation, cholesterol and blood sugar levels.

Fermented tea and water are blended with organic juices into one of KombuchaLuv’s six current flavors. From English Lavender Lemonade to their newest—and bluest—Seahawk-themed Blue Blitz, kombucha can be enjoyed chilled on its own or as a refreshing cocktail mixer. The 21+ crowd can swing by and sample a lavender lemonade spritzer at downtown Olympia’s Well 80.

Growth is always a good thing, and Manū and the team are currently looking for a distributor to help keep store shelves stocked up and down I-5. Until then, look for their product at QFC and Metropolitan Market stores, Marlene’s Market and Deli in Tacoma, L&L Hawaiian Barbeque in Tumwater, Olympia’s Headless Mumby Brewing Company and farmers markets or food co-ops throughout Olympia, Tumwater, Aberdeen and Vancouver.

With just three team members, only one of whom is the hands-on brewer, it’s incredible they can keep up with demand. Manū admits that “it took a year to get the process down, but now we can do it,” and they are always looking for new shelves to stock. 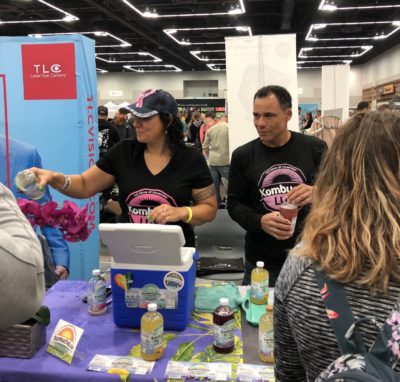 Want to buy a case for yourself or sell a few more?

Email kombuchaluv.virginia@gmail.com and they’ll happily deliver within the Olympia, Lacey and Tumwater area or arrange pick-up

at one of their many market locations. “Markets are our bread and butter,” admits Manū, and they love to support fellow local small businesses like theirs. Follow their journey on Facebook or Instagram for upcoming events, new flavors and locations to buy a bottle or two. With its quarantine, sweatpants and sourdough, 2020 is finally behind us. Jumpstart summer by raising a glass of light, refreshing, bubbly KombuchaLuv. Healthful and fruity, it supports women- and minority-owned businesses, local craftsmen and the welcome return of the community.