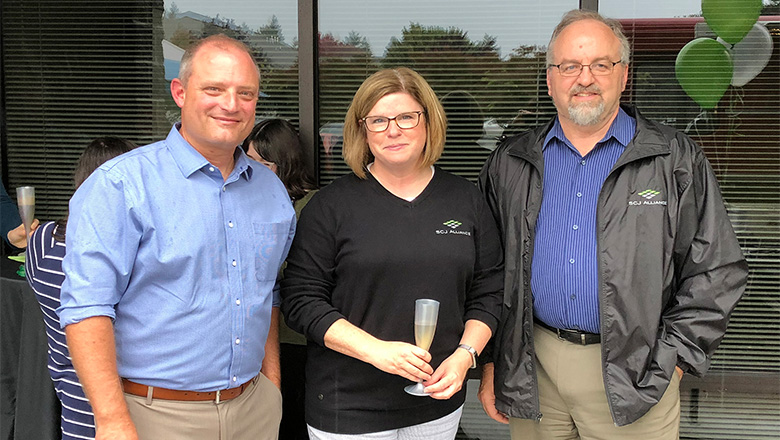 Roundabouts. Master plans. Corridors. Parks. Commercial projects. Fish culverts. Since its founding in May 2006, SCJ Alliance has worked on 3,346 varied projects for public and private clients.

There’s a lot to reflect on after 15 years in business. “We’ve gone from eight people working on Costco folding tables as desks, to 123 folks in ten offices in Washington, Montana, and Colorado,” says Jean Carr, SCJ President and CEO.

The firm was originally called Shea Carr & Jewell and engineering and community planning were the company’s bread and butter. Lisa Hicks is SCJ’s corporate compliance manager and recalls, “When we were just starting up, I remember talking with Perry about the vision for the company, he would say ‘In 10 years we’ll be 100 plus employees.’ and I just couldn’t imagine that since there were just eight of us at that time.”

Perry Shea was SCJ’s original president/CEO and his prediction was close, with the company hitting 100 employees in 2019. Currently, SCJ has 123 employees and transitioned to being 100% employee-owned in 2019.

Principal Bob Jewell and Chief Analytics Officer Amy Head were part of the first-year crew and Eric Johnston, today’s executive vice president, wasn’t far behind. The first year there were three engineers, while today there are 38 and another 32 individuals with professional designations from landscape architect to planner to soil scientist.

Amy, who also heads up Lacey’s office, remembers, “Everyone was a jack of all trades when we started. I remember doing grading design, helping out Bob with street lighting design, and learning how the heck you permit a sand and gravel mine because a client needed help with that type of work …all within the first week!”

Compared to the early days, projects are much more varied. Planning includes many more stakeholders and considerations, and transportation design goes far beyond roadways and intersections, to include cable-propelled transit and an ever-expanding variety of multi-modal options.

“We have watched new terms develop – such as Transit-Oriented Design, and now Trail-Oriented Design,” says Eric who has led strategic initiatives. “These trends match our expertise and experience, as well as our team’s passions.” Eric adds, “I love seeing our culture embraced by staff …  integrating business groups and offices and striving to turn every project into something of significance.” SCJ is also heavily involved in the community with leadership sitting on the boards of the Thurston Economic Development Council, Hands On Children’s Museum, Thurston County Chamber, Boys & Girls Club of Thurston County, YMCA, and others.

Today SCJ specializes in civil engineering, transportation planning and design, environmental and urban planning, landscape architecture, and public outreach. In firm’s tenth year, it was named the Top Place to Work for medium-sized employers by the Business Examiner. In total, the firm has earned 22 community and business awards for quick growth, community involvement, and being a great place to work, and another three dozen awards for project work.

What will the next 15 years hold for SCJ? Senior Principal and original President Perry Shea forecasts, “If you ask me where our next office will be, I will say it all depends …do you have an idea and business opportunity to explore?” He then quips, “My second response will be, I’ve always wanted an office in Hawaii because the sun is good for the soul.”