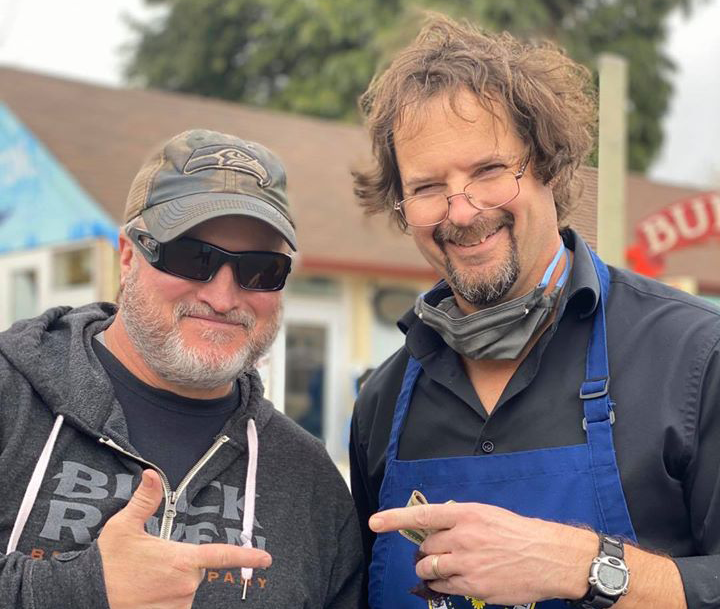 This story was originally published in the June 2020 VOICE Magazine, produced by the Thurston County Chamber.

It is 2:30 on a Friday afternoon at Eastside Big Tom’s. An employee interrupted owner Michael Fritsch’s conversation to deliver some news. “We’re out of ketchup packets again,” he announced. It was the third time that day; the demand for ketchup and every other item on the menu showed no signs of slowing down.

The popular and historic drive-through restaurant briefly closed when the COVID-19 outbreak hit but is back in business with limited hours, an adapted menu, and several innovative strategies for staying afloat amid the crisis. In an industry that has been particularly hard hit by the pandemic, Fritsch has been able to modify his business model while minimizing risks for his team.

Fritsch’s parents bought the restaurant in 1969, and it was Washington State’s first drive-through, as well as the first to incorporate solar power long before it was a recognized industry. In 2019 Big Tom’s celebrated its 50th anniversary. When he first realized it would be necessary to close, Fritsch was distraught (or in his terms, “I laid around in bed and cried for days on end”).

Technically, Big Tom’s didn’t have to shut down but morally there was no other choice, he explains. “Nobody was following the rules in the beginning at all. I have a couple of employees who take medicines that are destroying their immune systems, so they can’t work under those conditions. Some of my older workers who are more at risk have been with me for years. I didn’t have to shut down, but I did it because I needed to be able to live with myself.”

Once the business re-opened several weeks later, new measures were in place to keep staff and the public safe. Before COVID-19, it took eight to ten people to run the inside of the building; now just six are allowed. All business is done via the drive-through, customers can no longer walk up to the back door if they aren’t wearing a face mask, and the menu has been stripped down to make it manageable for the reduced staff.

“We brought back burger baskets,” says Fritsch. “We haven’t had baskets in 51 years. We’re trying to streamline it so that we’re just offering a few things instead of the 14 things we would normally be cooking.”

Hours of operation have also changed. For now, the restaurant is open from Monday to Saturday for two shifts, one from 11:00 a.m. to 2:00 p.m. and the other from 4:00 p.m. to 7:00 p.m. Even with a limited schedule, it’s been hard to keep things in stock. “Within those three hours of being open, the building gets stripped clean,” Fritsch observes. “It’s like piranhas.”

He’s also gotten creative with other ways to bring in funds to cover expenses like property taxes and payroll, including selling t-shirts and gift certificates online. Big Tom’s has hosted special events with pre-sales featuring items like donut breakfast sandwiches that they typically offer only once or twice a year. On Easter Sunday they sold hundreds.  “We’ve been doing these oddball things,” says Fritsch. “We’re busy, but we got so far behind while we were closed, and taxes don’t stop.”

While some customers have responded positively and understood the need for changes, others have not been so receptive. Repeatedly over the past six weeks since re-opening, his staff has been told that COVID-19 is a hoax, in some cases in an abusive fashion. At one point a group had one of his employees surrounded while they shouted about the government not being able to tell them what to do.

It’s not an acceptable way to treat his staff. “I want people to know that it’s not our fault,” he says. “I want them to stop taking their frustrations out on my wife.”

“It’s a fairly amazing program,” says Fritsch. “They have a webinar that my wife did where they’re able to get to questions that people have. We’re working it out so our staff can continue to do these strange shifts every day.”

As Washington slowly re-opens for business, landmarks such as Big Tom’s will play an important role in the community. For the public who loves their products, the best way to support them is to enjoy their products – in a civil manner.