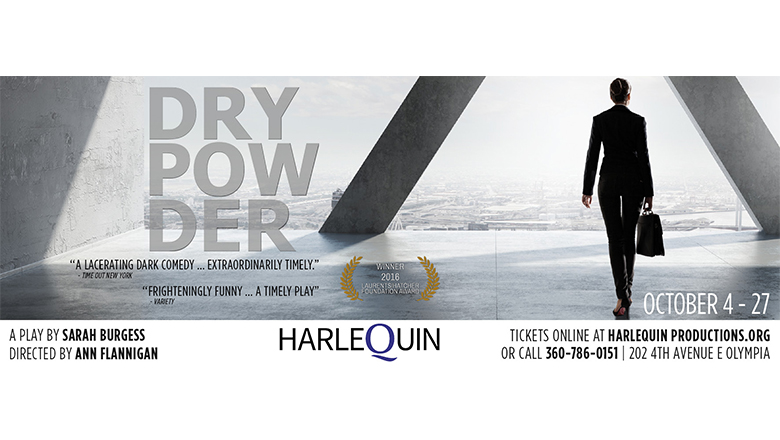 Set in the world of the one percent, Dry Powder is a rare creation: a glimpse into the boy’s club of finance, written by a woman. Playwright Sarah Burgess pulls back the curtain on private equity, where closed-door deals based on financial return bump up against their impact to the rest of society. Featuring break-neck dialogue reminiscent of Aaron Sorkin, the play is a 100- minute roller-coaster ride to get a deal signed on the dotted line. But at what cost? Particularly noteworthy in the cast of Harlequin veterans is Brian Tyrrell (St. Martin’s University, Centralia College) who returns to the Harlequin stage after an 8-year hiatus.

Associate Artistic Director Aaron Lamb jumped at the opportunity to present a timely comedy set in a traditionally male-dominated sector that features a strong female lead, and which could be directed by a local artist with professional experience in a similar field outside her considerable theatrical credentials.

Of the link between her day job and the world of the play, director Ann Flannigan says, “I’m a PR professional in a completely different part of the financial services ecosystem – credit unions. Couldn’t be farther from the rules of engagement for private equity. It’s fun to take a trip to the other end of the spectrum to explore this territory.”

Ann Flannigan has performed in 14 seasons at Harlequin. She has directed La Bete and Mud, and has performed in 16 productions, including: August: Osage County (Barbara Fordham), Present Laughter (Monica Reed), To Kill a Mockingbird (Maudie Atkinson), Fighting Over Beverley (Cecily Shimma), Philadelphia Story (Margaret Lord), and The Americans Across the Street (Alexa). Flannigan studied Theater at Lewis & Clark College and the American Academy of Dramatic Arts. She is Vice President of Public Relations for WSECU.

TICKETS: Tickets are available online at harlequinproductions.org, by phone at 360-786-0151, or in person 12-6pm, Tues-Friday and 2 hours before weekend performances at the Harlequin Box Office in the State Theater.