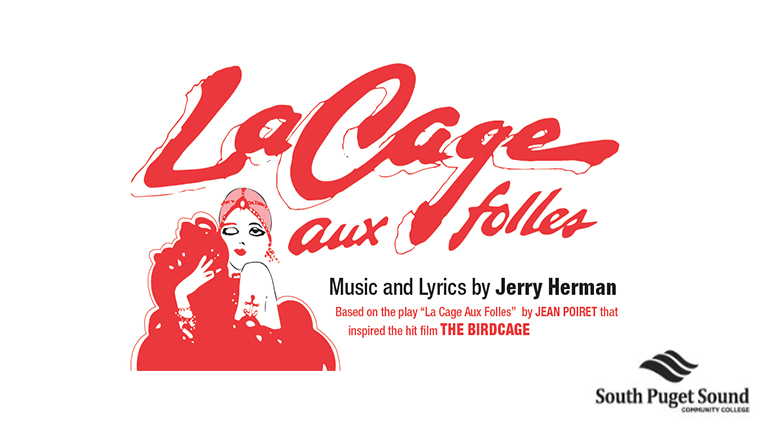 The SPSCC Drama Program has teamed up with former Timberline High School theater director Brenda Amburgy to bring a top Broadway hit back to Olympia after ten years. La Cage Aux Folles, the musical that inspired the film The Birdcage, will hit the Minnaert Center stage from May 10 to May 19, 2018.

Directed by Amburgy and produced by SPSCC drama professor Lauren Love, the collaboration on this production gives SPSCC students a unique opportunity to work with professional actors, technicians, and production personnel. From set design to costume and makeup, the local theater community and SPSCC students have joined efforts to pull off the Tony-Award winning musical.

“This is providing an opportunity for an internship that really is beyond anything I dreamed of,” said Love about the impact on her students.  “I’d love to see this collaboration continue with the community.  It helps us grow and helps the community grow.”

Amburgy, a beloved staple in Olympia’s theater scene after a 33-year career at Timberline High School, describes her love for La Cage Aux Folles: “It’s about two partners who have a son. There’s a problem and they have to solve it. And as a family, you solve problems with love and patience and understanding. It really is that simple.”

After twenty years of un-wedded bliss Georges and Albin, two men partnered for better-or-worse get a bit of both when Georges’ son (fathered during a one-night fling) announces his impending marriage to the daughter of a bigoted, right-wing politician. Further complicating the situation is the ‘family business’: Albin and Georges run a drag nightclub in St. Tropez, where Albin is the “star” performer ‘Zaza’. Georges reluctantly agrees to masquerade as “normal” when he meets the family of the bride-to-be. But Albin has other plans, with hilarious results.

“What I’d like to see is that, during the finale, the audience is singing along with the song and that they are forgetting about their troubles and know that we’re all one,” said Amburgy.

The show will open on May 10, 2018, at 7:30 p.m. in the Kenneth J. Minnaert Center for the Arts at SPSCC and will run through May 19.  Limited tickets are available for a Mother’s Day brunch and matinee combination on May 13, 2018.  Tickets are on sale through The Washington Center for the Performing Arts.