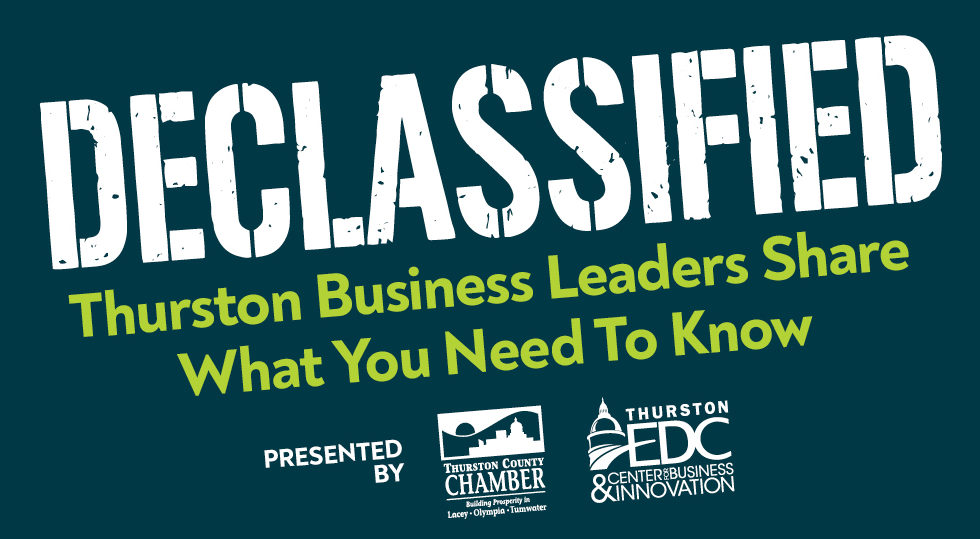 In Washington State, over half of the annual budget goes toward K-12 education, yet just over one percent of those funds are spent on childcare. The industry has been in crisis for decades, with many parents unable to afford up to $14,000 in annual daycare costs while childcare providers typically earn minimum wage and workforce turnover is high. Now, the COVID-19 pandemic has forced national attention on an issue too long ignored. The topic was the focus of Episode #15 of Declassified, a webinar produced in collaboration between the Thurston Economic Development Council and the Thurston Chamber of Commerce.

For childcare centers, the biggest impact of COVID-19 has been declining enrollment, according to Burris. “Many families chose to keep their children at home,” he says. “We surveyed childcare centers and found that the smaller ones were averaging losses of between $800 and $5,000 a month, whereas the larger centers were losing between $13,000 and $35,000 per month.” Government programs like the Payroll Protection Program helped, but those ended in July.

Parents, meanwhile, are scrambling to find solutions for when school resumes remotely. “Parents weren’t planning on paying $800 a month for childcare,” says Burris. “Even if they’re able to work from home, a lot of parents have found it very difficult to make it through these months and be productive at work.”

The issue disproportionately affects women. Many of the 31 percent of single parents in the state are female and face workforce disparities. “We have moms who are still not being paid what men are being paid,” says Fambles. “With Corona, these folks are in the service industry jobs that are considered vital to our economy, which are lower paid, and they’re not able to pay for these huge costs of childcare. This horrible burden is being borne by some of the folks that are already challenged in the workforce.”

Within Thurston County, many organizations are coming together to work on the problem. The South Sound YMCA and Boys & Girls Club of Thurston County have modified and expanded their services. Thurston Strong launched a childcare grant program that received 126 applications as well as a microgrant program. Burris suggested expanding childcare centers’ capacity to support older students, while PacMtn is exploring potentials for training to ‘upskill’ childcare workers to enable them to open their own businesses. Subsidies, vouchers for parents and a Co-op model of childcare operations were all suggested, along with policy changes to provide greater support for both parents and providers.

“Long-range, this will require a partnership between government and business,” says Robertson. “We have Medicare, we have social security. Childcare needs to be elevated to the same level. It’s a requisite for a strong economy.”

Go to ThurstonChamber.com and click on Events to listen to the full episode.