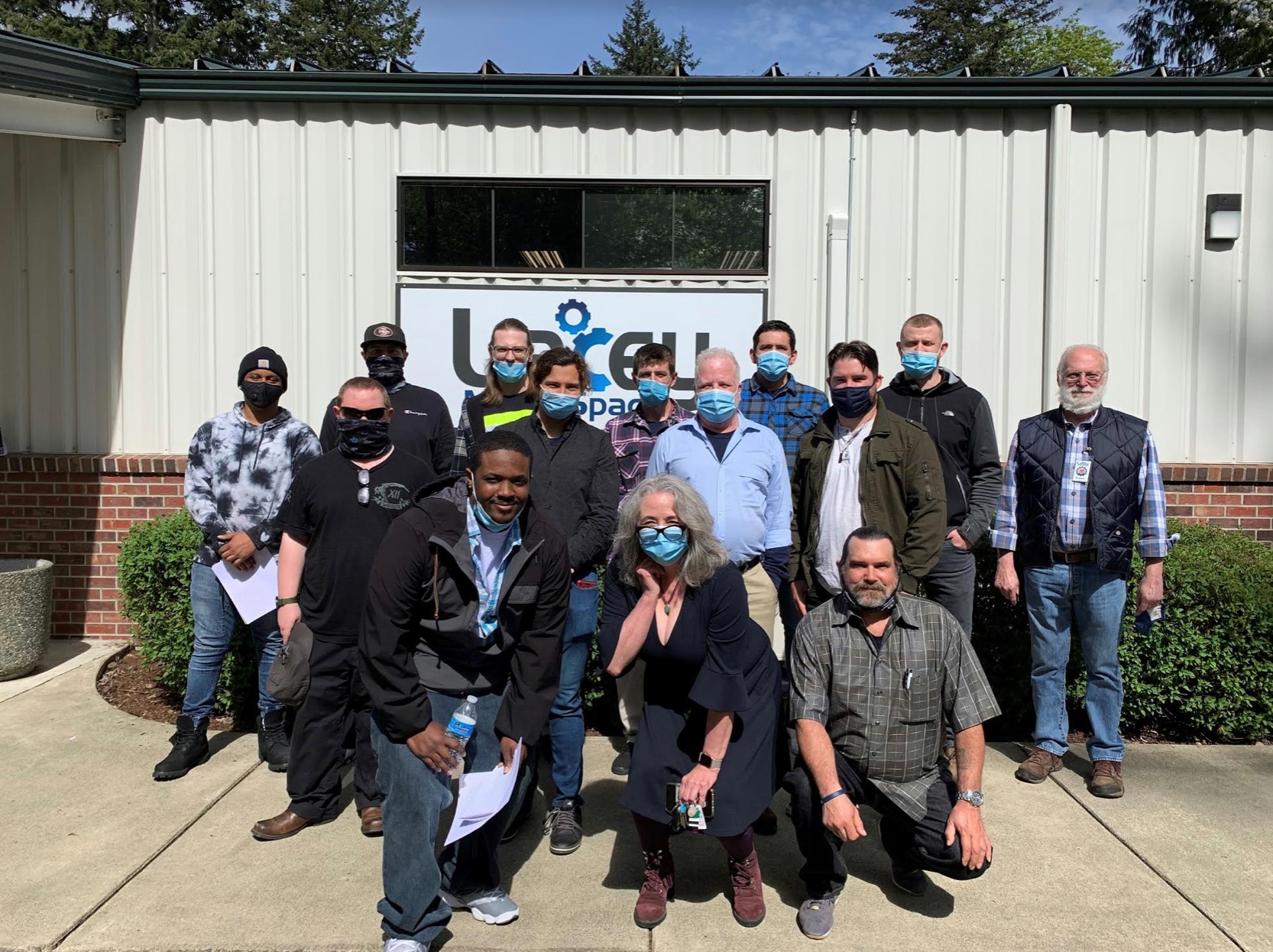 Joshua Newbill has been doing carpentry since he was ten years old, first with his dad and later for contractors. He knows construction. But in 2020, Newbill was the first to be laid off from his job at a remodeling company as one of the most recent hires. When he heard about a free, month-long training that offered multiple industry certifications plus forklift, flagging and OSHA safety training, he leaped at the chance.

For employers, the program addresses a central need within the construction industry: workforce development. “There is not one contractor in any trade that I know personally who is not looking for employees,” says John Erwin, President of Olympia Master Builders and owner of John Erwin Remodeling. “We have a tremendous need for construction workers, both skilled and unskilled. This program will help to fill that void.”

Jacquelin Earley was one of the program’s guest speakers who shared information about the opportunities available through Sierra Pacific Industries, where she is the Human Resources Coordinator. She volunteered to mock interview many of the class members and gave constructive feedback to help them be successful in their career search. Earley believes such programs can have a significant impact. “ANEW is introducing trades to a whole new audience,” she says. “Even if these class participants never work for SPI, our company benefits from the increased knowledge and workforce, and the trades industry as a whole is more successful in filling vacancies with valuable candidates.”

Presentations like Earley’s were helpful, according to Newbill. Both courses’ instructors were union members and shared their perspectives, but the class also heard from non-union business owners. “It showed a broad scale of the different types of work that is available,” he says. “Even though I’ve been doing carpentry for 16 years, I didn’t know about glaziers and sheet metal workers, so learning about that was great.”

To qualify, candidates had to be displaced workers who were at least 18 years old, had a high school diploma or GED, had a driver’s license and were drug-free. The ten students who completed the program spanned a range of ages and backgrounds. Trevor Peterson is in his twenties and has a history of seasonal work in the shellfish industry. “I was working mostly on the oyster beaches,” he explains. “I didn’t have set schedules or weekly paychecks, and I’d been doing it so long that it was hard to find a place where I could get other experience.”

Peterson connected with Earley after her presentation, and now he’s working at Sierra Pacific for $19.31 an hour. He’s happy to have found a stable job with growth potential within just two weeks of completing the Pre-Apprenticeship Program. “Trevor chose to take advantage of the class in hopes of expanding his skills and finding employment in a company that would invest in his future,” says Earley. “I believe he will find what he’s looking for within Sierra Pacific and I’m excited to see him grow his skills.”

Newbill has also been hired, in his case as a carpenter with John Erwin Remodeling. Initially, Erwin planned to recruit just one candidate from the program, but he ended up with two after reviewing the resume of Phillip Rodgers. “Here was a guy around my age who had spent most of his career in IT and computers,” says Erwin. “It had only been in the last six to eight years that he’s been a handyman.”

Based on personnel shifts and emerging needs at his company, Erwin ended up designing a job tailor-made for Rodgers based on his skillset. Rodgers is the new Assistant Production Manager, a role that requires an understanding of technology, customer service skills and a background in construction. He’s also in charge of warranty work.

Both Earley and Erwin say that they would be interested in participating in future programs. “I had a wonderful opportunity to come and meet the students and share an industry that many people may not even realize provides livable wages and benefits right here in our community,” Earley explains.”

Since the program’s graduation ceremony on April 28th, Erwin has heard from an industry colleague who was wondering where to find employees. “I told him, ‘I just tried a new thing, and it was great,’” he says. “I encouraged him to follow up with the Thurston County Chamber and find out when they’re doing the next Construction Industry Bootcamp.”