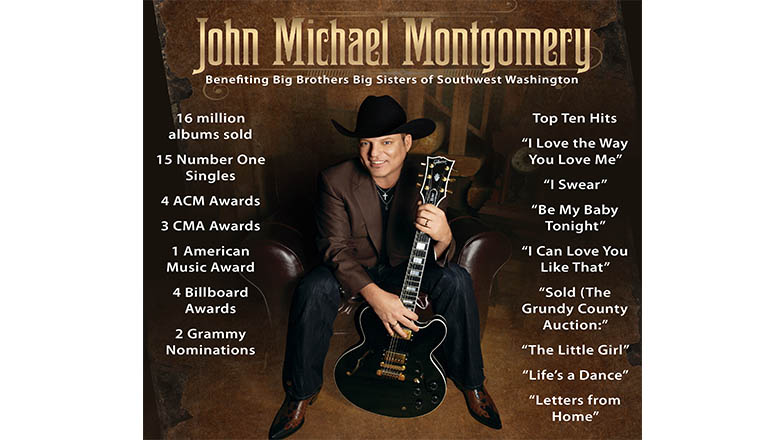 Big Brothers Big Sisters of Southwest Washington and Little Creek Casino Resort are teaming up to bring you one of country music’s top performers on Friday, May 12th. Since the days when “Life’s A Dance” turned him from an unknown artist into a national star, John Michael Montgomery has continued to captivate country music fans all over the nation. He received the CMA Horizon award and was named the ACM’s Top New Vocalist, setting off a long series of awards that included the CMA’s Single and Song of the Year, Billboard’s Top Country Artist, and two Grammy nominations.

Come watch the show Live at the Skookum Creek Event Center as John Michael Montgomery (and YOU) help benefit Big Brothers Big Sisters of Southwest Washington. Doors and the beer garden open at 7:00 pm, and the show begins at 8:00 pm.

Tickets are on sale now and are priced at just $30, $40 or $55. They can be purchased online at littlecreek.com, or at the Little Creek box office. All ticket proceeds benefit Big Brothers Big Sisters of Southwest Washington.