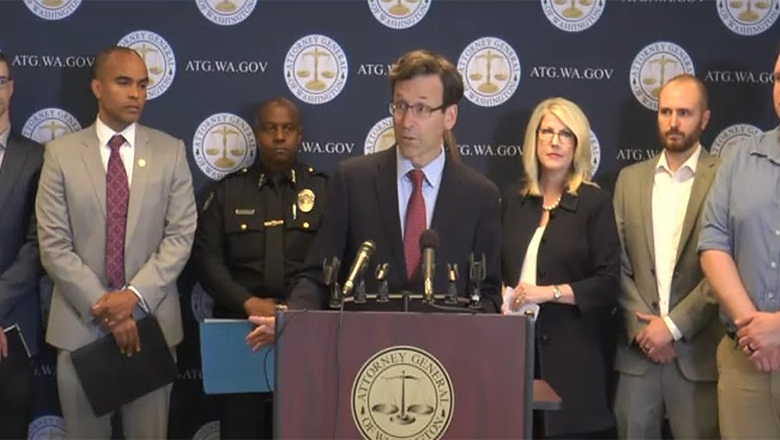 In his remarks, Ferguson said, “The tentacles of organized retail crime affects all Washingtonians. It’s going to take a statewide effort to get arms around it and address it.”

Sunde added, “There has never been a more critical time in Washington State to address the impacts of Organized Retail Crime on public safety and the safety of our customers and retail employees. As the retail industry recovers from the pandemic and workforce challenges remain.”

ORC has become a top issue for Washington Retail members as criminals have become more brazen and violent in their attacks on retail stores throughout Washington State. It has threatened public safety, the safety of our customers, and retail employees. “Many of our frontline retail workers have witnessed these outrageous crimes in action and have faced physical threats,” Sunde said.

Sally West, Regional Director, Walgreens Government Relations, emphasized, “Providing a safe environment for our customers, patients, and team members is our top priority. Our efforts to address all forms of criminal activity, including organized retail crime, is a multi-faceted approach which includes working with law enforcement, legislators, and the public about the cost of retail theft.”

“The Home Depot is fighting ORC on all fronts,” said Mike Combs, Director of Asset Protection for The Home Depot. “Online marketplaces make it easy to sell stolen and counterfeit items quickly and with little oversight, taking advantage of customers. We’re proud to be a member of this task force and partner with the Attorney General to prioritize large cases and dismantle these large, organized retail crime rings.”

As more thefts are turning violent – and even deadly – in retail stores, the multibillion-dollar problem has led to increased prices for shoppers, lost tax revenue, and product shortages as we continue recovering from the impacts of the pandemic.

Scott Draher, Lowe’s vice president of asset protection, said, “We are committed to working hand-in-hand with the task force to curb theft and make sure those who are responsible for this criminal activity are held accountable,”

Washington State isn’t alone in the battle. Over the past few years, several states have launched ORC Task Forces, including Illinois, Utah, New Mexico, New York, Arizona, and California, and nearly 40 states have ORC associations. The efforts of these task forces have been highly effective in prosecuting several multimillion-dollar cases.

Nationally, ORC’s financial impact is estimated at $69 billion annually. According to the National Retail Federation, 75% of retailers have seen an increase in ORC since 2020.