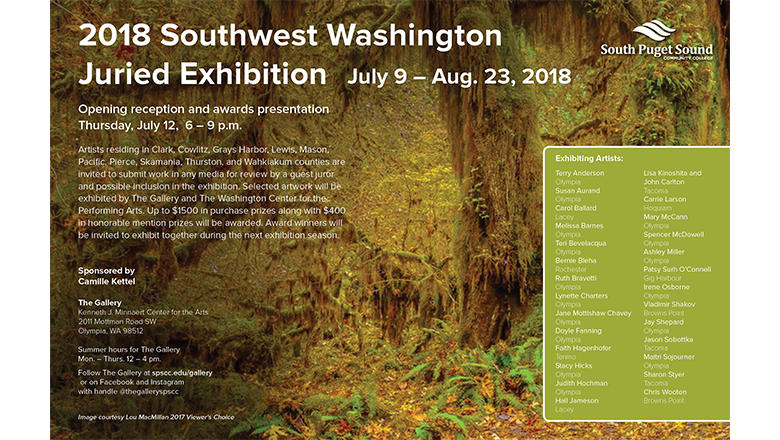 The Gallery at South Puget Sound Community College (SPSCC) opens its annual Southwest Washington Juried Exhibition on July 9, 2018.  The annual exhibition serves artists in the area by providing a high-quality exhibition opportunity that promotes the region’s creative identity.  Selected exhibiting artists are recognized in an awards presentation and opening reception on Thursday, July 12, from 6 p.m. to 9 p.m. in The Gallery.

Selected work from artists residing in Clark, Cowlitz, Grays Harbor, Lewis, Mason, Pacific, Pierce, Skamania, Thurston, and Wahkiakum counties is exhibited by The Gallery and The Washington Center for the Performing Arts. Additionally, top artists selected by the guest juror receive up to $1,500 in purchase prizes, along with $400 in honorable mention, and are invited to exhibit together during the 2018-19 exhibition season.

The exhibition runs from July 9 through August 23 at The Gallery at the Kenneth J. Minnaert Center for the Arts.  The Gallery is open Monday through Thursday from noon to 4:00 p.m. during the summer, or by appointment.  For more information, email artgallery@spscc.edu, call 360-596-5527, or visit The Gallery online at spscc.edu/gallery.